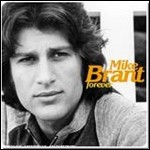 Mike Brant (born Moshé Michaël Brand, Hebrew: ‎) (February 1, 1947 April 25, 1975) was an Israeli pop star who achieved fame after moving to France. His most successful hit was "Laisse-moi t'aimer" ("Let me love you"). Brant committed suicide at the height of his career by jumping from the window of a Paris apartment.

Mike Brant's parents were Holocaust survivors from Poland. His mother, Bronia Rosenberg, originally from ód, was a survivor of the Auschwitz concentration camp. His father, Fishel Brand, from Bigoraj, had been a resistance fighter during World War II, and was 20 years his wife's senior. His parents married following the war, and they applied to emigrate to Mandatory Palestine, but were initially denied permission. They attempted to reach Mandate Palestine by sea on an Aliyah Bet ship, and were sent to a British internment camp for illegal Jewish immigrants at Famagusta, on the island of Cyprus. Mike was born in the British Military Hospital at Nicosia, Cyprus, on February 1, 1947. In September 1947, the family emigrated to Palestine after being included in a quota for Jewish immigration, and they arrived in Haifa, settling in a kibbutz in Galilee. Mike Brant did not start speaking until six years of age, and very soon told his family and friends that when he grew up he'd be "a star... or a tramp!" At the age of 11 he joined his school choir.

When he was 17, Moshe Brand joined his brother's band, "The Chocolates", as lead singer. The band started at parties and cafés in Haifa and Tel Aviv and moved on to nightclubs in hotels. Brant sang in English and French, although he spoke only Hebrew. In 1965, he changed his name from Moshe to Mike because it sounded more international. He was discovered by the Israeli impresario Jonathan Karmon, who signed him for a tour around the United States and South Africa that lasted almost a year.

In May 1969, Brant performed at the Baccara club at the Hilton Hotel in Tehran, Iran. A young French singer, Sylvie Vartan, also on the bill, was impressed and urged him to come to Paris. Brant arrived on July 9, 1969. It took ten days to find Vartan but eventually she introduced him to the producer Jean Renard, who had turned Johnny Hallyday into a star. Under Renard's guidance, he changed his surname from Brand to Brant, and recorded his biggest hit, "Laisse-moi t'aimer" ("Let Me Love You"). The song was a success at the Midem music festival in January 1970. "Laisse-moi t'aimer" sold 50,000 copies in two weeks.

Brant represented France in a radio contest broadcast all over Europe and in Israel. His song, sponsored by Radio Luxembourg, was "Mais dans la lumière" ("But In the Light"). He won. He continued to release hits: "Qui saura" ("Who Knows"), "L'Amour c'est ça, l'amour c'est toi" (written by Paul Korda/Robert Talar), "Cest ma prière" ("That's My Prayer"), "Un grand bonheur" ("A Great Joy") and "Parce que je t'aime plus que moi" ("Because I Love You More Than Myself"). His first album, "Disque d'Or" ("Gold Record") sold millions. Brant took a song written and composed by his friend Mike Tchaban/Tashban "Why do I love you? Why do I need you?" but French radio stations would not air it because it was in English. Brant returned to Israel soon afterward.

In February 1971, Brant was injured in a road accident. Although he suffered minor injuries, it received media attention. That year, he gave concerts in Israel, and performed a new song Erev Tov (Good Evening), written together with Nachum Heiman. During his concert tour in Israel, he was accompanied by Israeli singer Yaffa Yarkoni. During the Yom Kippur War in 1973, he performed in Israel for front-line soldiers.

By 1973, he was giving 250 concerts a year, some attended by 6,00010,000 people. This went on for two years. He suffered from depression and loneliness, and from the Second Generation Syndrome (family history of the Holocaust), and would alternate, sometimes enjoying life and at other times slipping back into depression.[1] On November 22, 1974, he attempted suicide, jumping out the window of his manager's hotel room in Geneva. He suffered fractures but survived. He cut the number of performances and concentrated on another album, Dis-lui ("Tell Her", French version of "Feeling"). In January 1975, he released two singles, "Qui pourra lui dire" and "Elle a gardé ses yeux d'enfants" (written by Richard Seff and Michel Jourdan).[1]

Mike Brant was buried in Haifa.[3]

This article uses material from the article Mike Brant from the free encyclopedia Wikipedia and it is licensed under the GNU Free Documentation License.

Black Mascara Eliane
Update Required To play the media you will need to either update your browser to a recent version or update your Flash plugin.