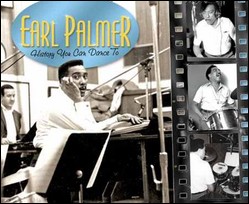 Palmer played on many recordings, including Little Richard's first several albums and many other well-known rock-and-roll records. According to one obituary, "his list of credits read like a Who's Who of American popular music of the last 60 years."[3]

Born into a show-business family in New Orleans and raised in the Tremé district, Palmer started his career at five as a tap dancer, joining his mother and aunt on the black vaudeville circuit in its twilight and touring the country extensively with Ida Cox's Darktown Scandals Review. His father is thought to have been the local pianist and bandleader Walter "Fats" Pichon.[3]

Palmer was 12 when he headlined a floor show at the Rhythm Club in New Orleans, "a very beautiful spot where one can enjoy a floor show, headed by Alvin Howey and Little Earl Palmer." [4]

Palmer served in the United States Army during World War II and was posted in the European theatre.[5] His biographer wrote,

Most Negro recruits were assigned to noncombatant service troops: work gangs in uniform. "They didn't want no niggers carrying guns," says Earl; they carried shovels and garbage cans instead. Earl's job, loading and handling ammunition, was relatively technical, but his duty was clear: to serve white infantrymen.

After the war ended Palmer studied piano and percussion at the Gruenwald School of Music in New Orleans, where he also learned to read music. He started drumming with the Dave Bartholomew Band in the late 1940s.[3] Palmer was known for playing on New Orleans recording sessions, including Fats Domino's "The Fat Man" and "I'm Walkin" (and several more of Domino's hits), "Tipitina" by Professor Longhair, "Tutti Frutti" by Little Richard (and most of Richard's hits), "Lawdy Miss Clawdy" by Lloyd Price, and "I Hear You Knockin'" by Smiley Lewis.

His playing on "The Fat Man" featured the backbeat that has come to be the most important element in rock and roll. Palmer said, "That song required a strong afterbeat throughout the whole piece. With Dixieland you had a strong afterbeat only after you got to the shout last chorus…It was sort of a new approach to rhythm music." Reportedly, he was the first to use the word funky, to explain to other musicians that their music should be made more syncopated and danceable.[3]

Palmer left New Orleans for Hollywood in 1957, initially working for Aladdin Records. He soon started working with the Wrecking Crew, a loose-knit group of session musicians who recorded nonstop during their heyday from 1962 to 1968.

The musicians union tracked Palmer playing on 450 dates in 1967 alone.

For more than 30 years he played drums on the soundtracks of many movies and television shows. Amongst the many artists he worked with were Frank Sinatra, Phil Spector, Ricky Nelson, Bobby Vee, Ray Charles, Sam Cooke, Eddie Cochran, Ritchie Valens, Bobby Day, Don and Dewey, Jan and Dean, the Beach Boys, Larry Williams, Gene McDaniels, Bobby Darin, Neil Young, the Pets, The Byrds when they were still known as The Beefeaters and B. Bumble and the Stingers. He also played in jazz sessions with David Axelrod, Dizzy Gillespie, Earl Bostic, Onzy Matthews, and Count Basie, and he contributed to blues recordings by B. B. King.

Palmer played drums in a recording session with the West Coast folk singer-songwriter Jim Sullivan around 1969 or 1970. The album was released twice with different audio mixes. On the Monnie Records album, U.F.O., Palmer's drumming can be clearly heard, but on the Century City Record, Jim Sullivan, the drums, percussion and bass were moved back in the mix.[5]

He remained in demand as a drummer throughout the 1970s and 1980s, playing on recordings for albums by Randy Newman, Tom Waits, Bonnie Raitt, Tim Buckley, Little Feat and Elvis Costello.[3]

A biography, Backbeat: Earl Palmer's Story, by Tony Scherman, was published in 1999.

In later years, Palmer played with a jazz trio in Los Angeles.[3]

Palmer died in September 2008, in Banning, California, after a long illness.[7] He is buried at Riverside National Cemetery in Riverside, California.

In 2000, Palmer became one of the first session musicians to be inducted into the Rock and Roll Hall of Fame.

Palmer was the session drummer for a number of film scores, including:[6]

Baby the Rain Must Fall, score by Elmer Bernstein
Ride the Wild Surf score by Stu Phillips
Robin and the Seven Hoods, score by Nelson Riddle

Pretty Polly, score by Michel Legrand
Cool Hand Luke, score by Lalo Schifrin
In the Heat of the Night, score by Quincy Jones

A Dandy in Aspic, score by Quincy Jones

Palmer was also the session drummer for a number of television show themes and soundtracks, including:[6]

This article uses material from the article Earl Palmer from the free encyclopedia Wikipedia and it is licensed under the GNU Free Documentation License.

Happy Sareena Overwater
Update Required To play the media you will need to either update your browser to a recent version or update your Flash plugin.