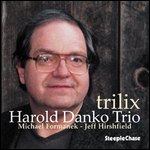 Danko attended Youngstown State University. Among his credits are work in the big bands of Woody Herman and Thad Jones/Mel Lewis, as well as smaller ensembles with Gerry Mulligan, Chet Baker and Lee Konitz.[1] He worked often with Rich Perry in the 1990s and also played with Rufus Reid, Kirk Lightsey, Jeff Hirshfield, Edward Simon, and Gregory Herbert.

Currently Danko is on faculty at Eastman School of Music.

Danko has recorded extensively for label Steeplechase Records since 1993.

This article uses material from the article Harold Danko from the free encyclopedia Wikipedia and it is licensed under the GNU Free Documentation License.

Solo noi due Russo
Update Required To play the media you will need to either update your browser to a recent version or update your Flash plugin.