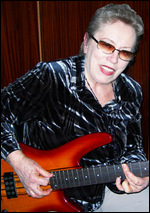 Carol Kaye (born March 24, 1935) is an American musician, known as one of the most prolific and widely heard bass guitarists, playing on an estimated 10,000 recordings in a career spanning over 50 years.[1]

As a session musician, Kaye was the bassist on many Phil Spector and Brian Wilson productions in the 1960s and 1970s. She is credited with the bass tracks on several Simon & Garfunkel hits and many film scores by Quincy Jones and Lalo Schifrin. She contributed to the Beach Boys' Pet Sounds.

Besides her contributions on bass guitar, she also played 12-string and six-string electric and acoustic guitars, contributing the acoustic rhythm guitar parts on Ritchie Valens' "La Bamba" in one of her earliest recording sessions,[2] as well as playing guitar on numerous other hit songs in the 1960s and 1970s, including the twelve-string electric on several Sonny & Cher songs.[3]

"Whatever your preferred instrument or genre, Carol Kaye is part of your history. You’ve heard her playing on your favourite classic songs, on the radio, on television, even on your parents’ records. Her style and influence are in your musical DNA, through the countless albums, hit singles, television theme songs, and movie soundtracks that feature her iconic guitar and bass-lines." - Alison Richtor, The First Lady: Carol Kaye[4]

Kaye was born in Everett, Washington, to professional musicians Clyde and Dot Smith. She grew up in poverty near Port Angeles and in 1949, at the age of fourteen began teaching guitar professionally.[5] Throughout the 1950s, Kaye played bebop jazz guitar in dozens of nightclubs around Los Angeles with many noted bands including Bob Neal's jazz group, Jack Sheldon backing Lenny Bruce, Teddy Edwards and Billy Higgins. By her own account, Kaye got into lucrative studio work "accidentally" in late 1957 with Sam Cooke.[5] A few years later, when a bass player failed to show for a session at Capitol Records in Hollywood, she was asked to fill in on what was then often called the Fender bass.[6] She was a member of The Wrecking Crew, which she clearly states was actually called "The Clique", a group of studio musicians who played on a large number of hit records from Los Angeles in the 1960s.[7]

Throughout the 1960s, while at the time unknown to the public, Kaye played bass on a substantial number of records that appeared on the Billboard Hot 100. By some estimates, she played on 10,000 recording sessions.[8] Kaye played bass on many of the Beach Boys hit recordings, including "Help Me, Rhonda", "Sloop John B", "God Only Knows", and "California Girls". She worked on Brian Wilson's ill-fated but legendary Smile project and was present at the "Fire" session in late November 1966 when Wilson reportedly asked the studio musicians to wear toy fire hats and burnt wood inside to fill the room with smoke. Kaye's work also appears extensively on well-known television and film soundtracks from the 1960s and early 1970s.

She worked with most of the leading producers and musical directors in Los Angeles during that era, including Terry Melcher, Brian Wilson, Michel Legrand, Phil Spector, Elmer Bernstein, Lalo Schifrin, David Rose, Dave Grusin, Ernie Freeman, Hugo Montenegro, Leonard Rosenman, John Williams, Alfred Newman, David Axelrod and Lionel Newman. Her intense solo bass line, reverberating in quiet moments in Spector's production of "River Deep, Mountain High", lent drama to the song's "Wall of Sound" and helped lift the record into the Grammy Hall of Fame. Kaye played the bass tracks on several of the Monkees hits, and did soundtrack work (including sound effects on bass guitar) for a young Steven Spielberg. She also came up with the famous intro on Glen Campbell's greatest hit "Wichita Lineman". Her tracks for Quincy Jones so impressed him, that he said in his 2001 autobiography Q that "... women like... Fender bass player Carol Kaye... could do anything and leave men in the dust."[9]

Kaye performed on several American television themes including the Quinn Martin produced Cannon, The Streets of San Francisco, Mission: Impossible, M*A*S*H, Kojak, Get Smart, Hogan's Heroes, The Love Boat, McCloud, Mannix, It Takes a Thief, Peyton Place and the Cosby Show. She is credited with performing on the soundtracks of Hawaii Five-O, The Addams Family and The Brady Bunch along with Ironside, Room 222, Bonanza, Wonder Woman, Alias Smith & Jones, Run for Your Life and Barnaby Jones.[10]

In 1969, she wrote How To Play The Electric Bass, the first of many bass tutoring books and instructional video courses. She gave lessons to thousands of students, including John Clayton, Mike Porcaro, Alf Clausen, David Hughes, Tony Sales, Karl E. H. Seigfried, Roy Vogt and David Hungate. Kaye retired from studio work during the 1970s because of arthritis. She later became active again as a session musician, live jazz performer, and teacher of bass and guitar, giving seminars and interviews.

Kaye played 12-string guitar on Frank Zappa's album Freak Out!. She also played on a few songs for his next album but declined to continue, saying she found some of the lyrics offensive. Kaye later said Zappa was good-natured and understanding about her qualms and they remained on friendly terms.

Kaye primarily uses a pick, or plectrum, on both guitar and bass, rather than plucking the strings with her fingers.[11]

Kaye played on hundreds of commercially released recordings and soundtracks. These lists represent only a small fraction of her recorded performances.

Credits for recorded singles on bass

Kaye is often credited for playing on the Beach Boys' "Good Vibrations" single,[13] but a session list compiled by Craig Slowinski for The Smile Sessions box-set liner notes states that, although she played on several sessions for the song, none of those recordings made the final edit as released on the single.[14] Brian Wilson remembers Kaye as one of the session players hired for the many sessions devoted to the song: "The bass part was important to the overall sound. I wanted Carol Kaye to play not so much a Motown thing, but a Beach Boys-Phil Spector riff, inspired by Phil. Carol played bass with a pick that clicked real good. It worked out really well. It gave it a hard sound."[15]

This article uses material from the article Carol Kaye from the free encyclopedia Wikipedia and it is licensed under the GNU Free Documentation License.

Forever Young Alphaville
Update Required To play the media you will need to either update your browser to a recent version or update your Flash plugin.