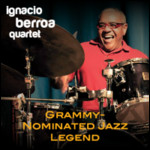 In 1980 Ignacio left his country during the Mariel Boatlift, moved to New York and joined Dizzy Gillespies quartet[1] in 1981 becoming the drummer of all the important bands Gillespie formed until his death in 1993.

Ignacio Berroa has been recognized by many as one of the greatest drummers of our times. Jazz Legend Dizzy Gillespie best defined Ignacio as: the only Latin drummer in the world in the history of American music that intimately knows both worlds: his native Afro Cuban music as well as Jazz

As an educator Ignacio has conducted clinics and master classes all over the world. As an author he made his mark with the instructional video: Mastering the Art of Afro Cuban Drumming as well as the books: Groovin in Clave and A New Way of Groovin.

His first album as a leader, Codes, released under Blue Note Records, was nominated for a Grammy in 2007. Codes also won a Danish Music Award in 2007 as best International Jazz Album. He was recently honored by inclusion in the 2011 Blue Note and Modern Drummer Release entitled "Jazz Drumming Legends". He is currently working on a new album for 5Passion Records and plans to produce a new instructional DVD under the same banner.

This article uses material from the article Ignacio Berroa from the free encyclopedia Wikipedia and it is licensed under the GNU Free Documentation License.