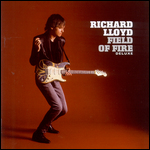 Lloyd first became interested in music as a small child. At the age of three or four he would sit at a small 28-key child's piano, playing notes and wondering where they went as the vibrations subsided. When he was a young teenager he spent his evenings with a transistor radio balanced on his ear and a pillow over his head, searching for intelligent life. When he saw The Beatles on The Ed Sullivan Show and experienced the phenomenon of Beatlemania, his main interest was anthropological, wondering how four young men would cause mass hysteria worldwide the likes of which could only be matched by world wars. He followed the British Invasion back to its roots in American Blues and Jazz and listened to as much blues and jazz as he could find.

Lloyd attended Stuyvesant High School in New York City,[1] which is a specialized science school considered to be one of the best public schools in the country. He attended the Be-ins and Love-ins in Central Park and even attended the Woodstock Festival and stayed awake for the entire three days, after being driven there by his stepfather. In his early teens he studied drums with William Kessler, who was the ghostwriter for Cozy Cole, one of the famous big-band drummers. But his cousins had also taught him three chords on the guitar, and after playing drums for 3½ years he had an auditory hallucination which told him to play a melody instrument. So he turned to the guitar. His first guitar was a Stratocaster, sold to him by one of his best friends older brothers for $2, which he saved up himself.

In his middle teens he met a scrawny black kid from Brooklyn named Velvert Turner who knew Jimi Hendrix. Jimi considered Velvert his "little brother", and took him on as his protégé, inviting him to various clubs and teaching him guitar from Jimi's apartment on W 12th St. As Velvert and Richard Lloyd were best friends, Velvert asked for permission to teach Lloyd what he was learning, and so Lloyd and Velvert began practicing together under the teaching auspice of Hendrix, and frequently attended his shows as well as those of other well-known acts such as Led Zeppelin, The Who, The Jeff Beck Group with Rod Stewart, The Allman Brothers Band, Grateful Dead etc.

At Stuyvesant High School, during the 11th grade, Lloyd decided that he was going to become a well-known guitarist, and so he stopped bringing his textbooks or homework to school, instead bringing an electric guitar in a hardshell case. When his teachers would ask him where his schoolbooks were, he would point to the case. Being asked to open the case, the teachers would proclaim "I don't see any books in there only an electric guitar", and Lloyd's retort was "That's the book I'm studying." He still managed to pass all of his tests but quit in May 1969, before graduation, because he did not believe in diplomas, and he considered that having a high school diploma would not do him any good in his pursuit of the music business. That summer his parents moved to Montclair, New Jersey and gave him an ultimatum: he could either get a job or repeat the 12th grade in a new high school. He chose the latter, which led to his deep friendship with another guitarist named Al Anderson, who went on to be one of a couple of Americans to play in Bob Marley's touring band, The Wailers along with Donald Kinsey.

After quitting a second high school before graduation, he moved to Boston, where he lived for two years. It was during this time that he enjoyed his first public performance, sitting in with John Lee Hooker at the Jazz workshop on Boylston Street. By this time Lloyd had already met and knew Jimi Hendrix, Buddy Guy, members of Led Zeppelin, and could be frequently found backstage conversing with his heroes. John Lee Hooker asked him what he did and Lloyd replied that he was a guitarist whereupon John Lee Hooker called him over and whispered into his ear "the secret of the electric guitar" and invited him to sit in with the band. After living in Boston for a period of time, Mr. Lloyd moved back to New York, but desiring to visit other centers of musical culture, he first decided upon hitchhiking across Route 66, but after considering how long it might take, he flew directly to Los Angeles instead. He spent 1971 through 1973 in Los Angeles, practicing the electric guitar without an amplifier and going to record company parties, which at that time were very ostentatious. He lived as a roommate with Richard Cromelin, the music critic for the Los Angeles Times, so again, he had access to the highest level and echelon of rock 'n roll.

In 1973 he heard about the New York Dolls and the beginning of a brand-new New York scene, so he arranged with a friend who owned a Lotus Europa to take him on as a passenger across the country. As they wound their way through the country at 125 miles an hour, with stops in famous towns like Memphis and New Orleans, he reached New York and heard the unpleasant news that the Mercer Arts Center had "fallen down." He began frequenting shows at the Diplomat Hotel and other spots, and seeing the possibility of a new scene, began contemplating putting a band together. He met a fellow named Terry Ork at Max's Kansas City, who had a huge loft in Chinatown and needed a roommate, so Lloyd moved into Ork's Chinatown loft, living in the front room, a small room facing East Broadway. Ork worked for Andy Warhol making silkscreen prints at night and working at a theatrical poster shop called Cinemabilia during the daytime. Ork very much wanted to manage or create a band such as Warhol had done with The Velvet Underground. During discussions with Lloyd, Ork mentioned that he knew of another guitarist without a band who was auditioning a couple of songs at Reno Sweeney's audition night. Reno Sweeney's was an off-Broadway style club on W. 13th St that mostly hosted singers like Peter Allen and Bette Midler.

Ork and Lloyd went to Reno Sweeney's one night during the summer of 1973, where Richard saw Tom Miller play three songs. Lloyd leaned over to Ork during the second song and told him that this fellow had something, but was missing something, and what he was missing, Lloyd had. He advised Ork that if Terry could convince Tom, the combination of Lloyd and Miller would have the makings of the band Terry Ork was looking for. This was the beginning of the formation of the band Television. Miller would eventually change his last name to Verlaine and Richard Meyers became Richard Hell and promised to learn the bass as they went along. With the addition of Billy Ficca on drums, the quartet was complete. Television rehearsed seven days a week for five or six hours a day during the fall and winter of 1973, and made their first public performance on March 2, 1974, at the Town House Theatre on W. 44th St.

Television were looking for a club where they could develop an audience and play more often as the house band, when Verlaine spotted a guy putting up the awning on a bar on the Bowery which stood under a flophouse for homeless alcoholics. Verlaine and Lloyd went back up and discussed the possibility of playing in this new club, which was to be called CBGBs. After Television's manager Ork promised CBGB a large take at the bar, Television was given a gig at the end of March 1974. CBGB was run by Hilly Kristal, who had planned to feature country, bluegrass and blues (CBGB) at the club, but when more original rock bands like Blondie, the Ramones and Talking Heads started to show up after finding out that there was a place to play, Ork became the official booking agent for the club. CBGB started to get noticed after bands like Television and Talking Heads started to fill the place up, and when a young poetess named Patti Smith began playing double bills with Television, the club started becoming famous. CBGB closed its doors in New York in 2007.

After recording demos for various record companies, Richard Hell left the band and was replaced by Blondie's bass player at the time, Fred Smith. Fred Smith's solid bass playing allowed for a more transcendent and profound music from the two guitarists and drummer, resulting in their being signed to Elektra Records in 1977.

Television recorded two albums for Elektra, Marquee Moon and Adventure. As a debut release in 1977, Marquee Moon remains on lists of greatest guitar albums in rock and roll history, and has never been out of print.

After recording Adventure in 1978, and finding success elusive in the United States, Television disbanded after a successful series of dates at New York's Bottom Line. The various members went their separate ways, although all of them continued in the music industry.

After Television first disbanded in 1978, Lloyd released one album for Elektra Records called Alchemy.[2] During his solo career, as a guitarist and session musician he has worked with various artists in the music industry, including Matthew Sweet, John Doe (of the band X), and Stephan Eicher. In 1990 Lloyd recorded a cover version of the Roky Erikson/13th Floor Elevators song "Fire Engine", which was included on the various artists tribute album Where The Pyramid Meets The Eye.

He is also known to teach other aspiring guitarists in his studio in New York City, where he frequently produces other acts. He acted as producer and recording engineer as well as a member of the band Rocket From The Tombs, entitled Rocket Redux, which was released on Smog Veil Records. He has also produced a number of records for other local bands, including The Blondes, Inc., Chris Purdy, Miss Mother USA and Kevin Otto. He recently finished up producing the album Let it Die from Holy Trinity River, a Brooklyn southern-rock influenced band,[4] as well as Skinny Girls Are Trouble (2010), the third album from country-punk songwriter Jim Neversink.[5][6][7] He still owns the famous pinstriped Stratocaster he played with Television.

His other current projects include a reformation of Rocket From The Tombs. He has now released six solo albums. Alchemy in 1979, Field of Fire in 1986 (re released in 2007 with an additional disc of music), his live disc Real Time in 1987 (recorded at CBGB) and The Cover Doesn't Matter in 2001. The Radiant Monkey was released on Parasol Records in late 2007. The CD features Lloyd playing everything but the drums (manned by session drummer Chris Purdy and, on one track, Television's Billy Ficca). 2009 saw his most ambitious album yet: "The Jamie Neverts Story", a tribute to his hero Jimi Hendrix and dedicated to the memory of his friend Velvert Turner. It was released on Parasol Records. "Jamie Neverts" was the secret codename that Velvert and Lloyd came up with to prevent all the kids in the neighborhood from trying to come along when they went to see Hendrix.

This article uses material from the article Richard Lloyd (guitarist) from the free encyclopedia Wikipedia and it is licensed under the GNU Free Documentation License.

Show Me The Meaning Of Being Lonely Backstreet Boys
Update Required To play the media you will need to either update your browser to a recent version or update your Flash plugin.