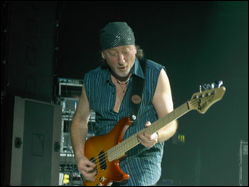 Roger David Glover (born 30 November 1945) is a British bassist, songwriter, and record producer. He is best known as the bassist for hard rock bands Deep Purple and Rainbow.[1][2] Glover wrote the guitar riff on "Maybe I'm a Leo".[3][4] As a member of Deep Purple, Glover was inducted into the Rock and Roll Hall of Fame in April 2016.[5]

Born near Brecon, Wales, Glover moved with his family to St Helens before settling in the South Kensington area of London, at the age of ten. Around that time his interests started to shift towards rock music, and by the time he was thirteen Glover began playing guitar. He later moved to the North London district of Pinner, and while at Harrow County School for Boys he formed his first band, Madisons, with a group of friends; in time this merged with a rival band to become Episode Six, a band which later featured Glover's future Deep Purple bandmate, vocalist Ian Gillan. The two left Episode Six in 1969 to join Deep Purple.

Glover spent four years (1969–1973) with Deep Purple, during which the band saw their most successful releases in the albums in Rock, Machine Head, Who Do We Think We Are and the live album Made in Japan. He is credited with developing the title for the band's iconic "Smoke on the Water" song, thus inspiring the song's lyrics which were written by Ian Gillan. Glover says the title came to him when he awoke from a dream two days after the famous fire over Lake Geneva. While he liked the title, he was reluctant to have the band use it because he initially thought it sounded like a drug song.[6] Glover also developed the guitar riff to "Maybe I'm a Leo", stating, "I wrote the riff to 'Maybe I'm a Leo' after hearing John Lennon's 'How Do You Sleep?'."[3]

Glover departed the band, along with Gillan, after Deep Purple's second tour of Japan in the summer of 1973.

Throughout the 1970s Glover produced albums and/or singles by such acts as Judas Priest, Nazareth, Elf, Status Quo, the Ian Gillan Band and David Coverdale.

In 1974 Glover released his first solo album, The Butterfly Ball and the Grasshopper's Feast, which generated the single "Love Is All". The single did little in the U.K., but became an unexpected number one-hit song in the Netherlands and Belgium. The song came with an animated music video starring a guitar playing frog. [7] In 1978 Glover's second album followed: Elements.

From 1979 to 1984 he was the bassist, lyricist and producer for Ritchie Blackmore’s band, Rainbow, working on four of the group's studio albums.

In 1983 he recorded his third solo album, Mask, released the next year.

When Deep Purple reformed in April 1984, Glover returned to his old band where he has remained for the last three decades.[8]

In 2002 Glover released his fourth post-DP album, entitled Snapshot, under the name Roger Glover and the Guilty Party. The album featured performances from Randall Bramblett (who shared co-writing credits on several tracks) as well as Glover's daughter, Gillian.

In 2011 he released his second Guilty Party album, If Life Was Easy, which featured guest appearances by Nazareth's Dan McCafferty and Pete Agnew as well as Walther Gallay and Daniel "Sahaj" Ticotin.

In 2001 Glover was among a host of bass players who contributed to Gov't Mule's double album The Deep End, recorded as a tribute to the late Allen Woody, Mule's original bassist. Glover played on Deep Purple's "Maybe I'm a Leo", which was one of Woody's favourite songs. On 3 May 2003, in New Orleans, Glover also took part in a special concert performed by Gov't Mule featuring appearances from all bass players who had contributed to The Deep End album.

On 7 October 2007 Glover joined his former bandmate Jon Lord to perform Concerto for Group and Orchestra at the Royal & Derngate in Northampton. The concert also featured the Royal Philharmonic Orchestra conducted by Paul Mann.

In 2008 Glover played bass on a charity single called "Lucy's Song", written and produced by David Domminney of Rogue Studios in London and available at iTunes. Income from the sale went to The Linda McCartney Cancer Centre (specifically to promote their Field of Women event which took place at Liverpool Cricket Club on 6 July 2008).

On 21 March 2012 Ian Paice was playing a gig with the Deep Purple tribute band Purpendicular in Pratteln, Switzerland. The band received a surprise reinforcement as Roger Glover "happened to be in the neighbourhood" and joined them on stage.

Glover has been married twice and has three daughters. Musician Gillian Glover (born 1976) is from his first marriage. He currently lives in Switzerland with his partner and their two daughters.[9]

In 2004 ITV Wales aired a TV special about Glover, entitled Roger Glover – Made in Wales (produced by Craig Hooper) which featured interviews from fellow musicians Ian Gillan and Ian Paice, as well as Glover's mother, Brenda, and his then-wife.

Roger Glover played Fender Precision, Fender Mustang and Rickenbacker 4001 basses during his early years with Deep Purple. In late 1970's, he used a Gibson Thunderbird. In mid-1980's Roger has used Peavey Foundation with neck from Peavey Fury Bass. Since the mid-1990s, he has used Vigier Bass Guitars, SWR heads and cabinets, and Picato and Ernie Ball strings.[10]

On 22 October 2010 Roger Glover's artwork exhibition called Happy Silence opened at the K-8 e.V. Galerie in Cologne. Previously Glover has let many of his pictures be auctioned in other galleries for charitable purposes, but this was the first large-scale presentation of his work.

This article uses material from the article Roger Glover from the free encyclopedia Wikipedia and it is licensed under the GNU Free Documentation License.

When Love And Hate Collide Def Leppard
Update Required To play the media you will need to either update your browser to a recent version or update your Flash plugin.