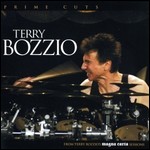 Terry John Bozzio (born December 27, 1950) is an American drummer best known for his work with Missing Persons and Frank Zappa.[2] He has been featured on nine solo or collaborative albums, 26 albums with Zappa, and seven albums with Missing Persons. He has been a prolific sideman, playing on numerous releases by other artists since the mid-1970s. He was inducted into the Modern Drummer Hall of Fame in 1997.[3] His stepdaughter, Marina, is also a drummer and a member of the heavy metal band Aldious,[4] and his son Raanen is also a drummer.

Terry Bozzio was born on December 27, 1950, in San Francisco, California. He started at age 6 playing makeshift drum sets. At the age of 13 he saw the Beatles' premier performance on The Ed Sullivan Show[2] and begged his father for drum lessons.[5] Bozzio has cited Mitch Mitchell and Ginger Baker as his main influences in the youth years.[6] During the 1960s, he played in the garage bands Blue Grass Radio, The Yarde, and Tamalpais Jungle Mountain Boys.

In 1968 Bozzio attended Sir Francis Drake High School in San Anselmo, California, where he received a music scholarship award, and later went on to the College of Marin. During this time he studied concurrently with Chuck Brown on the drum set and Lloyd Davis and Roland Kohloff on a percussion and timpani scholarship. He also played Bartok-Dahl-Cowell & Baroque chamber ensembles with the Marin and Napa County Symphonies.

He recorded and toured with Frank Zappa beginning in 1975, and appeared, also as a vocalist, on a number of Zappa's most successful albums, including Zoot Allures (1976), Zappa in New York (1976), Sheik Yerbouti (1979) and Thing-Fish (1984), and in the concert movie Baby Snakes (1979) (which includes him singing lead on a portion of the song "Punky's Whips"). He is noted for performing Zappa's "The Black Page", a piece of music designed to be a "musician's nightmare", a page so dense with notes it was nearly solid black.

In 1977 he joined The Brecker Brothers with longtime San Francisco friend and guitarist Barry Finnerty. With The Brecker Brothers, Bozzio toured and recorded the live album Heavy Metal Be-Bop (1978). Shortly after, he was dismissed by Zappa as he joined Group 87 with Mark Isham, Peter Maunu, Patrick O'Hearn and Peter Wolf. The group auditioned for and was signed to a record deal with CBS; Bozzio declined membership in the group and then auditioned unsuccessfully for Thin Lizzy.

After Bill Bruford & Allan Holdsworth's departures from the band UK in late 1978, Bozzio joined Eddie Jobson and John Wetton to continue UK as a trio. The trio recorded Danger Money (1979) and a live album Night After Night (1979) and toured the U.S. and Canada twice (supporting the popular progressive rock band Jethro Tull), and in Europe and Japan.

After the Missing Persons breakup in 1986, Bozzio joined ex-Duran Duran guitarist Andy Taylor's solo band. He also played on sessions with Robbie Robertson, Gary Wright, Don Dokken, XYZ, Paul Hyde, Herbie Hancock, Dweezil Zappa, and Richard Marx. During this time he began touring as a clinician/solo drummer and recorded Solo Drums, which was his first instructional video for Warner Brothers. Bozzio joined Mick Jagger and Jeff Beck for the video "Throwaway", and teamed up with Beck and keyboardist Tony Hymas to co-write/produce and perform on the Grammy Award winning album Jeff Beck's Guitar Shop. promoted on The Arsenio Hall Show, which was Jeff Beck's first-ever live appearance on American TV.

In 1990–1995 Terry developed ostinato-based drum solo compositions and recorded his second instructional video Melodic Drumming and the Ostinato Volumes 1, 2, and 3, as well as Solo Drum Music Volumes 1 & 2 on CD. He also joined Tony Hymas, Tony Coe, and Hugh Burns to form the band Lonely Bears and record The Lonely Bears, Injustice, and The Bears are Running, while living in Paris, France. He also formed the band Polytown with David Torn and Mick Karn. In 1993 Terry joined T. M. Stevens and Devin Townsend on Steve Vai's Sex & Religion album.

From 1995 to 2002 Bozzio did tours of the US, Australia, Canada & Europe as a solo drum artist as well as recording two solo CDs: Drawing the Circle and Chamberworks. He was inducted into the Modern Drummer Hall of Fame in 1997. With bassist and Chapman Stick player Tony Levin and guitarist Steve Stevens, he formed the group Bozzio Levin Stevens, which released two albums: Black Light Syndrome in 1997, and Situation Dangerous in 2000.

In 2001, he teamed up with Chad Wackerman to produce the Duets video and Alternative Duets CDs. Bozzio won the Clinician of the Year award twice as well as Drum Magazine's Drummer of the Year and Best Clinician. Internationally, he received Slagwerkkrant Magazine's (Netherlands) and Player Magazine's (Japan) Best Drummer Award.

Bozzio was inducted into Guitar Center's RockWalk in Hollywood on January 17, 2007[7] along with rock and roll icons Ronnie James Dio and Slash.

Bozzio also worked with the nu metal band Korn on their 8th studio album after the departure of their drummer David Silveria. He was scheduled to play on the road with the band during the Family Values Tour, but he left and was replaced by Joey Jordison of Slipknot and later Ray Luzier. Since November 2008 Bozzio has toured with guitarist Allan Holdsworth, bassist Tony Levin, and drummer Pat Mastelotto as the experimental super-group HoBoLeMa.

This article uses material from the article Terry Bozzio from the free encyclopedia Wikipedia and it is licensed under the GNU Free Documentation License.

A Night Like This Caro Emerald
Update Required To play the media you will need to either update your browser to a recent version or update your Flash plugin.