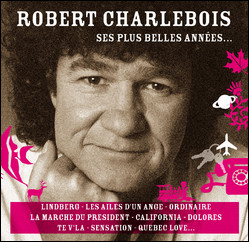 Robert Charlebois, OC, OQ (born June 25, 1944) is a Quebec author, composer, musician, performer and actor. He is an important figure in French music.

Charlebois was born in Montreal, Quebec. Among his best known songs are Lindberg and Je reviendrai à Montréal. His lyrics, often written in joual, are funny, relying upon plays on words. He won the Sopot International Song Festival in 1970.

In 1970 he sang with Italian singer Patty Pravo the Italian song La solitudine. In the same year, he performed at the Festival Express train tour in Canada, but did not appear on the documentary film.

He co-starred with Terence Hill, Miou-Miou and Patrick McGoohan in the western Un genio, due compari, un pollo (A Genius, Two Partners and a Dupe, 1975) as Steamengine Bill. Thirty-eight years later, Charlebois had a cameo as Jean-Seb Bigstone, the French-Canadian Broadway producer, in the 2012 Gad Elmaleh/Sophie Marceau film Happiness Never Comes Alone.

The Quebec-based microbrewery Unibroue was owned, in part, by Charlebois until it was purchased by Sleeman Breweries in 2004 which in turn was bought by Japanese beer brewing giant Sapporo in 2006.

This article uses material from the article Robert Charlebois from the free encyclopedia Wikipedia and it is licensed under the GNU Free Documentation License.

You're The Star Rod Stewart
Update Required To play the media you will need to either update your browser to a recent version or update your Flash plugin.