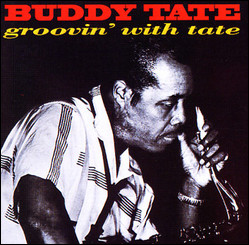 George Holmes "Buddy" Tate (February 22, 1913 February 10, 2001) was a jazz saxophonist and clarinetist. He has been counted as one of the great tenor saxophonists of his generation and was inducted into the Big Band and Jazz Hall of Fame. [1]

Tate was born in Sherman, Texas, and began performing on alto saxophone. As a teenager in 1925, he played with his brother and their band called McCloud's Night Owls."[2]

Tate quickly switched to tenor saxophone making a name for himself in bands like Andy Kirk's. He joined Count Basie's band in 1939 and stayed with him until 1948. He had been selected by Basie due to the sudden death of Herschel Evans, which Tate states he predicted in a dream.

After his period with Basie ended, he worked with several other bands before he found success on his own, starting in 1953 in Harlem. His band worked at the "Celebrity Club" from 1953 to 1974.[3] In the late 1970s, he co-led a band with Paul Quinichette and worked with Benny Goodman.

In 1980, he was seriously injured by scalding water at a hotel shower, which kept him inactive for four months.[4] He later suffered from a serious illness. The 1990s saw him slow down, but he remained active playing with Lionel Hampton among others.

In 1992, he took part in the documentary, Texas Tenor: The Illinois Jacquet Story. He lived in New York until 2001 when he moved to Arizona to be cared for by his daughter. He died in Chandler, Arizona at the age of 87.

This article uses material from the article Buddy Tate (musician) from the free encyclopedia Wikipedia and it is licensed under the GNU Free Documentation License.