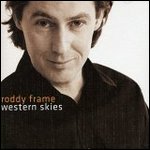 Roddy Frame (born 29 January 1964[1]) is a singer-songwriter and musician from Scotland. He was the founder of the 1980s indie band Aztec Camera, and has undertaken a solo career since the dissolution of the band.

Frame was born in East Kilbride, South Lanarkshire, Scotland. Frame became interested in music in the mid-1970s and was inspired by David Bowie.[2]

At the age of 16, he became involved with Postcard Records and his band Aztec Camera began to record a string of low budget singles, such as "Just Like Gold" and "Mattress of Wire".[3][4] The latter drew attention from John Peel a presenter on BBC Radio 1.

In 1983, Aztec Camera released High Land, Hard Rain,[5] their first album on Rough Trade Records, though this did not include the first two Postcard singles. It featured the hit single "Oblivious", and Aztec Camera were recognised as one of the key acts on the Rough Trade label. On tracks such as "Walk Out to Winter" and "Back on Board", Frame sang poetic lyrics about love, both lost and found, two themes he would revisit with an increasingly mature outlook through a number of subsequent albums.[5] In late February 2013, a white cotton t-shirt with the cover art of the band's debut album was produced by Frame and sold on his solo website.[6]

However, after High Land, Hard Rain, Frame signed the band to WEA. Aztec Camera's second album, Knife, released in 1984, was produced by Dire Straits' guitarist/singer, Mark Knopfler. The album was highlighted by the hit single "All I Need is Everything".

Beginning with Aztec Camera's third album, 1987's Love, Frame became the group's only member, augmented by a wide array of session musicians for both studio recordings and live dates. Essentially Frame was a now a solo artist, working under the Aztec Camera brand name.

Love spawned 1988's "Somewhere In My Heart", which reached number 3 in the UK Singles Chart and is still a staple of FM radio in the UK. Frame performed a duet with one of his musical heroes, Mick Jones of The Clash, on his 1990 single "Good Morning Britain", which showcased an overtly political streak that sometimes featured in his work. He also recorded with the Japanese composer Ryuichi Sakamoto. Frame decided to abandon the name Aztec Camera in 1996 after the 'group' released their final album, Frestonia, for WEA.[5]

Following Frestonia, Frame pursued a solo career under his own name. His first solo album, the critically acclaimed The North Star, was released in 1998 on the Independiente label and featured the single "Reason For Living".[5]

Frame's second solo album Surf was a collection of acoustic songs that attracted widespread critical acclaim and was generally regarded as a return to songwriting form.[7] The song "Small World" was used as the theme music for the BBC Television comedy series Early Doors.

Frame performed his first ever show at the Glastonbury Festival in 2003 and his next solo album Western Skies was released three years later in May 2006. Later in 2006, he released a live album called Live at Ronnie Scott's, a recording of a performance that was completed on 29 May 2005, and this was followed in 2007 by Live at The Blue Note, Osaka, another live recording of a 21 September 2006 show in Japan.[8][9]

In June 2013, AED Records, a record label founded by musician Edwyn Collinsa close friend and collaborator of Frameand James Endeacott, announced an "early 2014" release date for Frame's fourth solo album. The label's name is an acronym of "Analogue Enhanced Digital" and the album is referred to as a "lovely thing".[10]

To commemorate the 30th anniversary of the release of the Aztec Camera album High Land, Hard Rain, Frame announced that he would perform a series of live shows in the UK in which the album would be played in its entirety with the support of a backing band. According to a media report on 28 August 2013, none of the original band members will be involved with the shows and the anniversary event is not considered an Aztec Camera reunion. The Domino music company is co-ordinating a vinyl pressing of the album that will be released in the second half of 2013.[11]

Frame has maintained a long-term friendship with Collins, who was also signed to Postcard Records in the 1980s, with his band Orange Juice, alongside Aztec Camera. Frame performed with Collins in November 2007 during Collins' first concert after he suffered a serious illness,[12] and the pair played again at the Glastonbury Festival in June 2008.

Dan Carey and Rob Da Bank, whose band name is Lazyboy, collaborated with Frame on the song "Western Skies";[13] Frame then re-recorded the song for a solo album of the same name and has performed an acoustic rendition of the song in live settings, with the inclusion of a harmonica solo.[14][15]

Frame has recorded cover versions of "In My Life" by The Beatles,[16] "Bad Education" by Blue Orchids, Cyndi Laupers', "True Colors" and a slowed-down version of "Jump", originally recorded by Van Halen.[5]

Frame toured the UK throughout October 2011 with a small backing band.[17]

The 30th anniversary UK tour of the album High Land, Hard Rain will occur in December 2013 and will include the following venues: London's Theatre Royal, Manchester's Bridgewater Hall and Glasgow's Royal Concert Hall.[18]

This article uses material from the article Roddy Frame from the free encyclopedia Wikipedia and it is licensed under the GNU Free Documentation License.

Autumn In May Luca Little
Update Required To play the media you will need to either update your browser to a recent version or update your Flash plugin.