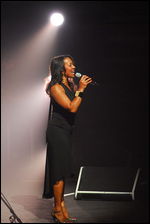 Mac and Katie Kissoon emigrated to the United Kingdom with their family in 1962. Katie began recording in 1965 cutting a total of four singles under the name Peanut and was later a member of the Rag Dolls who had a single released in 1967 and another in 1968. Mac Kissoon was a member of the Marionettes in 1966 and 1967, then fronted his own band which played US bases in Europe: returning to the UK in 1969 he cut a solo record: "Get Down With It - Satisfaction" which became a Top 30 hit in the Netherlands - #29 in February 1970.

Mac and Katie Kissoon continued to record together and although their follow-up single to "Chirpy Chirpy Cheep Cheep" entitled "Freedom" failed to register in either the UK or US the track charted throughout Europe with estimated sales approaching one million units. The duo continued to have European chart success particularly in the Netherlands and on the Belgian Dutch-language chart and finally broke through in the UK in 1973 when "Sugar Candy Kisses" reached #3 UK.

In 1997, Mac and Katie Kissoon released an album of new material called From Now On.[2]

In 2002, Katie Kissoon appeared on stage at the Concert for George. In 2006-2007 she was also part of the backing section for Roger Waters' The Dark Side of the Moon Live world tour. The tour continued for nine dates in 2008, but Katie was unable to perform and was replaced by Sylvia Mason-James.[3]

Katie Kissoon performed backing vocals on three tracks on Van Morrison's 2008 album Keep It Simple, and "The Healing Game" and sang with his band on several concert dates in 2008.

This article uses material from the article Mac and Katie Kissoon from the free encyclopedia Wikipedia and it is licensed under the GNU Free Documentation License.

Planets Unshakeables
Update Required To play the media you will need to either update your browser to a recent version or update your Flash plugin.