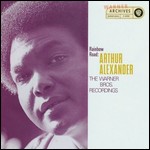 Arthur Alexander (May 10, 1940 June 9, 1993) was an American country songwriter and soul singer. Jason Ankeny, music critic for Allmusic, said Alexander was a "country-soul pioneer" and that, though largely unknown, "his music is the stuff of genius, a poignant and deeply intimate body of work on par with the best of his contemporaries."[1] Alexander wrote songs publicized by such stars as the Beatles, the Rolling Stones, Otis Redding, Tina Turner and Jerry Lee Lewis.[2]

Alexander was born in Sheffield, Alabama. Working with Spar Music in Florence, Alabama, Alexander recorded his first single, "Sally Sue Brown", under the name of June Alexander (short for Junior), which was released in 1960 on Jud Phillips' Judd Records. (Phillips is the brother of music pioneer Sam Phillips).

A year later, Alexander cut "You Better Move On" at a former tobacco warehouse-turned-recording studio in Muscle Shoals. Released on Nashville's Dot Records, the song became a soul/R&B chart hit, and laid the foundation for the modern recording studio FAME. "You Better Move On" is perhaps Alexander's best-known song, covered by the Rolling Stones, the Hollies, George Jones & Johnny Paycheck and Mink DeVille. "Anna (Go to Him)", a U.S. R&B Top Ten Hit, was covered by the Beatles and Humble Pie. The Beatles also did live recordings of "Soldier of Love", which was also performed by Marshall Crenshaw and Pearl Jam, "A Shot of Rhythm and Blues", and "Where Have You Been" recorded live at the Star-Club, in Hamburg, 1962. "Set Me Free" (covered by Esther Phillips and Joe Tex) were also major hits and established Alexander as a pioneering arranger of others' tunes, as well as an established songwriter in his own right.

In 1962. Steve Alaimo was the first to record Alexander's "Everyday I Have to Cry", which reached number 46 on the Billboard Hot 100 chart.

In the mid-1960s, Alexander switched to another label, Sound Stage 7, but failed to find commercial success. Although a 1972 album for Warner Brothers was promising, the singer's potential seemed to wither. He secured a pop hit with "Every Day I Have to Cry Some" on Buddah Records in 1975, but the success remained short-lived. The song was also covered by Ike and Tina Turner (produced by Phil Spector), the McCoys, Dusty Springfield, Joe Stampley, C.J. Chenier, Jerry Lee Lewis and others. The follow-up single "Sharing The Night Together" (written by Muscle Shoals songwriters Ava Aldridge and Eddie Struzick) reached No. 92 on the R&B charts, but earned Dr. Hook & the Medicine Show a Top 10 hit in 1978; the Dr. Hook version was used in the 2012 Family Guy episode "Mr. and Mrs. Stewie".

For many years, Alexander was out of the music business; he was a bus driver for much of this time. In 1990, he was inducted into the Alabama Music Hall of Fame. He began to perform again in 1993 as renewed interest was shown in his small catalogue. His last album Lonely Just Like Me was his first in 21 years. He signed a new recording/publishing contract in May 1993 but suffered a fatal heart attack the following month, three days after performing in Nashville with his new band.

Alexander is the only songwriter whose songs have been covered on studio albums by the Beatles, the Rolling Stones and Bob Dylan (who recorded "Sally Sue Brown" on his 1988 LP Down in the Groove). "Go Home Girl" was also recorded by Ry Cooder on his 1979 album Bop Till You Drop.

(USA issues except where noted)

This article uses material from the article Arthur Alexander from the free encyclopedia Wikipedia and it is licensed under the GNU Free Documentation License.

Heart To Love Passenger
Update Required To play the media you will need to either update your browser to a recent version or update your Flash plugin.