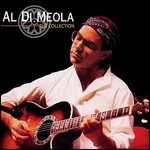 Al Laurence Di Meola (born July 22, 1954) is an American guitarist. Known for his works in jazz fusion and world music, he began his career as a guitarist of the group Return to Forever in 1974. Between the 1970s and 1980s, albums such as Elegant Gypsy and Friday Night in San Francisco earned him both critical and commercial success.[1][2]

Born in Jersey City, New Jersey, into an Italian family with roots in Cerreto Sannita, a small town northeast of Naples, Di Meola grew up in Bergenfield, where he attended Bergenfield High School.[3][4] He has been a resident of Old Tappan, New Jersey.[5]

When he was eight years old, he was inspired by Elvis Presley and the Ventures to start playing guitar. His teacher directed him toward jazz standards. He cites as influences jazz guitarists George Benson and Kenny Burrell and bluegrass and country guitarists Clarence White and Doc Watson.[6]

He attended Berklee College of Music in the early 1970s. At nineteen, he was hired by Chick Corea to replace Bill Connors in the pioneering jazz fusion band Return to Forever with Stanley Clarke and Lenny White. He recorded three albums with Return to Forever, helping the quartet earn its greatest commercial success as all three albums cracked the Top 40 on the U.S. Billboard pop albums chart.[1] He could play so fast, that he was sometimes criticized for playing too many notes.[7]

As Return to Forever was disbanding around 1976, Di Meola began recording solo albums on which he demonstrated mastery of jazz fusion, flamenco, and Mediterranean music.[7] His album Elegant Gypsy (1977) received a gold certification. In 1980 he recorded the acoustic live album Friday Night in San Francisco with Paco de Lucía and John McLaughlin.[1]

In the beginning of his career, as evidenced on his first solo album Land of the Midnight Sun (1976), Di Meola was noted for his technical mastery and extremely fast, complex guitar solos and compositions. But even on his early albums, he had begun to explore Mediterranean cultures and acoustic genres like flamenco. Notable examples are "Mediterranean Sundance" and "Lady of Rome, Sister of Brazil" from the Elegant Gypsy album (1977).

His early albums were influential among rock and jazz guitarists. Di Meola continued to explore Latin music within jazz fusion on Casino and Splendido Hotel. He exhibited a more subtle touch on acoustic numbers "Fantasia Suite for Two Guitars" from the Casino album and on the best-selling live album with McLaughlin and de Lucia, Friday Night in San Francisco. The latter album became one of the most popular live albums for acoustic guitar, selling more than two million copies worldwide.[8]

With Scenario, he explored the electronic side of jazz in a collaboration with Jan Hammer (later of Miami Vice theme fame). Beginning with this change, he further expanded his horizons with the acoustic album Cielo e Terra. He began to incorporate the Synclavier guitar synthesizer on mid-1980s albums such as Soaring Through a Dream. By the 1990s, Di Meola recorded albums closer to world music and modern Latin styles than jazz. A notable exception was the 1991 album Kiss My Axe, which peaked at #2 on the US Contemporary Jazz Albums chart.

However, in 2006 he rediscovered his love of the electric guitar,[9] and the DVD of his concert at the Leverkusen Jazz Festival 2006 is subtitled Return to Electric Guitar.[10]

This article uses material from the article Al Di Meola from the free encyclopedia Wikipedia and it is licensed under the GNU Free Documentation License.

Sister Golden Hair America
Update Required To play the media you will need to either update your browser to a recent version or update your Flash plugin.