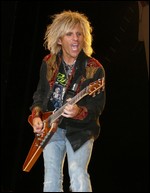 DeVille was born Bruce Anthony Johannesson in the Bay Ridge area of Brooklyn, New York. His interest in music began at age two while watching The Beatles perform on The Ed Sullivan Show. DeVille began playing the guitar at the age of five after he was given a $27 Japanese Telecaster copy. As his love of music grew, he began listening to bands such as Led Zeppelin, Black Sabbath, The Rolling Stones, David Bowie, Aerosmith, Van Halen, Cheap Trick, Queen, and especially Kiss.

At the age of 18, DeVille formed the band Lace in New York, which adopted a highly sexual, "glam" image. It was during this time period that DeVille began writing the song "Talk Dirty To Me", which would later appear on Poison's first album, Look What the Cat Dragged In.

DeVille began studying music theory at New York University, but never completed his studies. Instead, he moved to Los Angeles in 1981 and played in various bands, including Screaming Mimi, Lace Slip, St James, and Roxx Regime (which later changed their name to Stryper), before auditioning for Poison.

DeVille's audition impressed drummer Rikki Rockett and bassist Bobby Dall, but angered vocalist Bret Michaels. DeVille refused to play the songs that had been given to him as preparation, and instead jammed with a guitar riff he had written. The riff, which would eventually be featured in the Poison single "Talk Dirty to Me", would ultimately launch the band's career. Slash, who would go on to fame with Guns N' Roses, also auditioned for the position and made it to the final three, but lost to DeVille; In his Autobiography Slash acknowledged discomfort with Poison's image when Rikki Rockett suggested that Slash wear make-up and change his clothing style.

DeVille co-wrote Poison's debut album with Bret Michaels, Bobby Dall, and Rikki Rockett. Look What the Cat Dragged In was released on August 2, 1986. It included the hits "Talk Dirty to Me", "I Want Action", and "I Won't Forget You". Sales for the album topped 3 million copies in the United States. DeVille also wrote much of the material for Poison's second album, the multi-platinum selling, Open Up And Say... Ahh!, which was released on May 21, 1988 and would ultimately go on to sell 8 million copies worldwide. It included the hit song "Nothin' But a Good Time", co-written by DeVille and Poison's only number 1 single "Every Rose Has Its Thorn".

In 1990, Poison released the multi-platinum selling Flesh & Blood, an album which was again largely written by DeVille. During this period, DeVille also performed lead guitar on Warrant's hit song "Cherry Pie", from the album Cherry Pie.

While touring in support of Flesh and Blood, and despite Poison's success, substance abuse and tensions with other members of the band, particularly lead singer Bret Michaels, led to conflict within the band. Leading up to the release of the live album Swallow This Live conflict between Michaels and DeVille culminated in a fistfight backstage at the 1991 MTV Video Music Awards after DeVille played the wrong song, playing "Talk Dirty To Me" instead of "Unskinny Bop", and being high and intoxicated during the performance. Asked to quit, DeVille left Poison and was replaced by guitarist Richie Kotzen.[3]

Following his departure from Poison, DeVille joined a band called "Needle Park" and recorded "Hey Good Lookin'" for the soundtrack to the Pauly Shore movie Son In Law. But soon DeVille succumbed to his cocaine and alcohol addictions and imprisoned himself in his house. Years later, he underwent rehabilitation and radical therapy. This included moving back to live with his parents for eight months. He eventually kicked his addictions, but subsequently gained over 70 pounds, which he later lost. He launched several solo and side projects including "The Stepmothers". None of DeVille's bands had the commercial success of Poison, which continued on without DeVille with a number of replacement guitar players.

Samantha 7 was a short-lived band composed of guitarist DeVille, guitarist Ty Longley, bassist Krys Baratto, and drummer Francis Ruiz. They played at Woodstock 1999. Originally the band's name was The Stepmothers, but the band was forced to change their name following a legal dispute with another band of the same name. DeVille can be heard referring to this band as The Stepmothers in a Behind the Music interview. Samantha 7 released the self-titled album Samantha 7 in 2000, and toured the US and UK in support of the record that was released on Columbia/Portrait Records.

The Samantha 7 song "I Wanna be Famous" would later be used in the opening of the reality show The Surreal Life: Fame Games, in which DeVille starred.

DeVille regained contact with his ex-bandmates from Poison in 1996 and made a successful return to the band for the Greatest Hits reunion tour in 1999. Several shows were recorded and released as a studio album/live album hybrid release in the following year titled Power to the People. DeVille continues to record and perform with Poison.

In 2005 and 2006, DeVille starred in a popular TV series South of Nowhere on The N. He played the role of Raife Davies, the father of Ashley Davies and Kyla Woods. Also in 2006 when Poison celebrated their 20th anniversary, DeVille starred in The Surreal Life on VH1. He also starred in the spin off series The Surreal Life: Fame Games in 2007. In 2002, DeVille had a brief cameo appearance as "Lloyd", a member of the airband GFK Groovecart, on the last episode of season 6 of Just Shoot Me (titled "The Boys In The Band").

In March 2007, DeVille and his girlfriend Shannon Malone became parents[4] with the birth of Vallon Deville Johannesson.[5]

In 2001, DeVille became the inspiration for rock & roll comic C.C. Banana.[6] A twisted homage to DeVille, C.C. Banana speaks in a cartoonish parody of DeVille's voice and wears a large yellow banana costume. C.C. Banana has interviewed numerous rock stars[7] and made many TV appearances.[8]

Parody act Beatallica mentioned C.C. in the song "I want to choke your band", the theme of which pits heavy metal bands against hair metal like Warrant, Poison, and Whitesnake. The lyric goes "No mercy for C.C., 'cuz he's in a hair band".

This article uses material from the article C.C. DeVille from the free encyclopedia Wikipedia and it is licensed under the GNU Free Documentation License.

When I Close My Eyes Larissa Baumann
Update Required To play the media you will need to either update your browser to a recent version or update your Flash plugin.