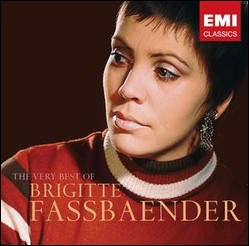 Brigitte Fassbaender (German pronunciation: [bit fasbnd]; born Berlin, 3 July 1939), is a German mezzo-soprano opera singer, a stage director from 1999 to 2012, and Intendant of the Tiroler Landestheater in Innsbruck, Austria. She holds the title Kammersängerin from the Bavarian State Opera in Munich and the Vienna Staatsoper.

Fassbaender was born in Berlin, the daughter of screen actress Sabine Peters and the celebrated German baritone, Willi Domgraf-Fassbaender. The family settled in Nuremberg after World War II. She spent her early career in Munich.

Brigitte Fassbaender studied singing with her father, Willi Domgraf-Fassbaender, at the Nuremberg Conservatory. She joined Munich's Bavarian State Opera in 1961, where her first leading role was Nicklausse in The Tales of Hoffmann. Fassbaender sang Octavian (Der Rosenkavalier) in Munich, in 1967, the role that launched her international career. In 1971, she sang at Covent Garden and made her Metropolitan Opera debut in 1974.

In addition to her operatic work, Fassbaender has performed in the concert hall as a Lieder singer and in movies, singing the role of Prince Orlofsky in the 1984 film production of Johann Strauss's Die Fledermaus. She has made dozens of recordings: operas, Lieder (including Schubert's 'Winterreise' and 'Schwanengesang'), oratorios (Bach's Christmas Oratorio, Handel's Messiah, etc.) and appeared in numerous televised opera productions now available on DVD. These include signature roles such as Octavian and Orlofsky, both conducted by her frequent collaborator Carlos Kleiber (whose birthday, in a different year, she shared). Fassbaender has also taught masterclasses. In 2010, she wrote the book and texts for a successful musical - Lulu - das Musical. Shylock!, based on Shakespeare's Merchant of Venice. A second collaboration with the composer Stephan Kanyar was written for Innsbruck in 2012.

In recent years, Fassbaender has held directorial positions. She was the Opera director at the Staatstheater Braunschweig for two years from 1995 to 1997. In 1999, she became Intendantin (managing director) [1] of the Tiroler Landestheater in Innsbruck, a position she held until 2012. In 2006, she was awarded the Musikpreis der Landeshauptstadt München. In January 2011, the French Government appointed her an honorary Chevalier of the Légion d'honneur.[2]

This article uses material from the article Brigitte Fassbaender from the free encyclopedia Wikipedia and it is licensed under the GNU Free Documentation License.