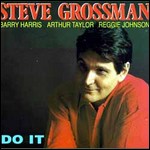 Grossman was notably Wayne Shorter's replacement in Miles Davis' jazz-fusion band. Then, from 1971 to 1973, he was in Elvin Jones's band.

In the late 1970s, he was part of the Stone Alliance trio with Don Alias and Gene Perla. The group released four albums during this period, including one featuring Brazilian trumpeter Márcio Montarroyos. The albums also feature an array of other musicians. They went on to release three live reunion albums during the 2000s.[1]

This article uses material from the article Steve Grossman (saxophonist) from the free encyclopedia Wikipedia and it is licensed under the GNU Free Documentation License.

Free Like A Bird Naomi Candreia
Update Required To play the media you will need to either update your browser to a recent version or update your Flash plugin.