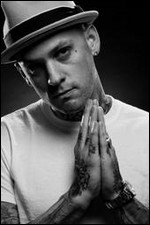 Benjamin Levi Madden (né Combs; born March 11, 1979) is an American guitarist, vocalist, songwriter, and producer. He is the lead guitarist and backing vocalist for the band Good Charlotte, as well as pop rock collaboration The Madden Brothers. He formed both of these acts with his identical twin brother, Joel Madden. Benji was a coach on The Voice Australia from 2015-16 with his brother Joel.

Madden was born Benjamin Levi Combs on March 11, 1979, in Waldorf, Maryland, to Robin Madden and Roger Combs.[1][2] He has an identical twin, Joel Madden, with whom he formed the band Good Charlotte.[1] He has an older brother named Josh and a younger sister, Sarah. All attended La Plata High School in La Plata, Maryland.[2]

Madden started the fashion line called Made Clothing, along with his brothers Joel and Josh, but the line became defunct. In early 2006, it became DCMA Collective. A DCMA Collective store opened in Los Angeles on March 15, 2008, but later closed.

While still playing in Good Charlotte, Madden and Joel wrote and produced for other artists. Madden was a co-writer and co-producer of some of the songs on Hilary Duff's Most Wanted (2005) compilation album. He later helped write the songs "Amnesia" for pop rockers 5 Seconds of Summer and "No Ordinary Girl" for pop artist Kalin and Myles. He has appeared as a back-up vocalist for artists such as MxPx, Kill Hannah, Apoptygma Berzerk, Mest, The 69 Eyes, Sean Kingston, Three 6 Mafia, Chamillionaire, and Matisyahu.[3] As of September 2009 Madden has guest played in the band Taintstick, led by radio talk show host, professional MMA fighter, and pro skateboarder, Jason Ellis.

On April 3, 2010, Madden took part in a boxing match against MTV and VH1 host Riki Rachtman at Ellismania 5: Get These Brawls. The event was hosted by Jason Ellis at The Joint in the Hard Rock Hotel and Casino in Las Vegas. Madden beat Rachtman by knockout at 1 minute and 42 seconds into the first round.[4]

On November 11, 2011, Madden and his brother Joel Madden released a free mix-tape, "The Madden Brothers: Before Volume 1". It contains new artists the brothers were personally interested in. Their brother Josh Madden helped to produce the mix-tape. then Unknown Rappers, Machine Gun Kelly, Rockie Fresh, Kreayshawn, Cassie Veggies, HXLT, and Wiz Khalifa all appeared on the mix-tape.

In 2012, Benji appeared on the TV show The Voice Australia, alongside Joel as joint mentor-judges.

In early 2013, Benji helped write Tonight Alive's song "Breakdown". He sang back-up vocals at the end of the song and made an appearance in the video.

In 2014, electronic dance music artist TJR released his track "Come Back Down", which features Benji on the track's vocals. The Madden Brothers recording "Greetings from California" was released on September 16, 2014.

In mid-2014, both of the Madden brothers appeared as coaches on The Voice Kids Australia in a double chair, after the example of the Dutch The Voice of Holland and The Voice Kids (Netherlands season 1) edition in which the singer's duo Nick & Simon appeared as a judging duo between 2010 and 2015. In early 2015, Benji joined Joel as a coach on the main edition of The Voice, bringing the number of coaches up to five.

In January 2008, media outlets reported that Madden and his long-time fiancée, Australian starlet Sophie Monk, had split up.[5] In response to the rumors, Good Charlotte's rep told Us Weekly: "Benji Madden and Sophie Monk are together and very happy." However, in mid-February it was officially announced by Monk's Sydney agent, that "Sophie and Benji have officially split. The decision was mutual and they remain amicable."[6]

Madden began dating actress Cameron Diaz in May 2014. The two were unofficially engaged before Christmas Day in 2014 [7] and were spontaneously married on 5 January 2015,[8] in a Jewish ceremony, at their Beverly Hills home.[9]

He has many tattoos, including a tattoo of Benjamin Franklin, which covers his entire back.[10]

Madden is an avid MMA and boxing fan. He has competed in several amateur fights since 2010. Growing up in Maryland, Madden and his brother became big fans of the Baltimore Orioles and the Washington Redskins. He has the Orioles O's tattooed by his ear. He owns a Bengal cat named Danzig and has a collection of both new and old cars, including a Porsche 911, 1964 Chevrolet Impala, Lamborghinis, Audi R8, Jeep Grand Cherokee, and a 1963 Ford Galaxie.

With The Madden Brothers

This article uses material from the article Benji Madden from the free encyclopedia Wikipedia and it is licensed under the GNU Free Documentation License.

This Kiss Faith Hill
Update Required To play the media you will need to either update your browser to a recent version or update your Flash plugin.