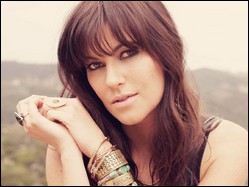 Tristan Ann Prettyman[1] (born May 23, 1982) is an American singer-songwriter and former Roxy model from San Diego, California. She is signed to Virgin Records and released her first major label album Twentythree on August 2, 2005, followed by her second album Hello which was released on April 15, 2008. Her third studio album, Cedar + Gold, was released on October 2, 2012.[2]

Prettyman was born and raised in the town of Del Mar in San Diego County, California.[3] Taking advantage of the town's proximity to the ocean, Prettyman began taking surfing as an elective at her junior high school at the age of 12.[4] She competed in the National Scholastic Surfing Association (NSSA) High School Division and earned fifth place in the state championship while still in middle school. She attended Torrey Pines High School in neighboring Carmel Valley.

Around the age of 15, Prettyman was given a mix tape of Ani DiFranco's music.[5] She played the album constantly and has stated that DiFranco's music still has great sentimental value to her, serving as a reminder of when Prettyman's musical ambitions began.

Inspired by DiFranco's music and due in part to her nature of being a self-described "nosy kid", Prettyman began playing around with her father's old acoustic guitar. Although her parents were initially angry with her for "taking" the guitar, they eventually became supportive of her interest in music.

Prettyman began playing in front of friends and they encouraged her to begin writing her own material. One night, while performing for some friends, an employee of the production company The Moonshine Conspiracy, run by surf filmmaker Taylor Steele and professional surfer Chris Malloy, overheard Prettyman play and asked her to appear in the company's film Shelter. Prettyman's song "Anything at All" was eventually featured on the film's soundtrack.

Prettyman began her career playing locally in clubs and bars throughout California's San Diego County before being invited to join fellow San Diegan Jason Mraz on his national tour. Prettyman spent winter 2004 in New York collaborating with producer Josh Deutsch who had also worked with Mraz.

Twentythree, Prettyman's first album, was released on August 2, 2005[6] when she was 23 years old. The title pays homage to the 23 Enigma, a perceptual concept referring to the abnormally high occurrence of the number 23 in daily life as described in the book Cosmic Trigger by Robert Anton Wilson. The album peaked at number 24 on Billboard's Top Heatseekers chart. The music on the album was compared with that of other contemporary surf rockers of the time, such as Jack Johnson.[3][6] Prettyman's second album, Hello...x, was released in 2008 and sold 18,187 copies in its first week, debuting at 27 on the Billboard 200.[7]

Prettyman plays and endorses Taylor Guitars, as well as Fender & Gretsch. A former Roxy model and avid surfer, Prettyman was interviewed by Men's Fitness in 2008 and questioned about surfing and staying active while on tour.[5]

In June 2012, "My Oh My", the first single from Prettyman's third studio album Cedar + Gold was released.[8] Cedar + Gold was released on October 2, 2012 and peaked at number 47 on the Billboard 200 and 19 on US Top Digital Albums.[9] The music video for the album's second single, "I Was Gonna Marry You", also debuted on October 2 to coincide with Cedar + Gold's debut.[10] Prettyman toured with The Script in October and November 2012 in support of the album.[11] "Say Anything" from Cedar + Gold is featured in 2013 film adaptation and accompanying soundtrack of Nicholas Sparks's novel Safe Haven.

Prettyman's half-brother is Cody McClintock, an independent film producer. Prettyman recently announced on Twitter she was newly engaged to venture capitalist, Bill Maris, as of December 2013.

This article uses material from the article Tristan Prettyman from the free encyclopedia Wikipedia and it is licensed under the GNU Free Documentation License.

Sunrise Simply Red
Update Required To play the media you will need to either update your browser to a recent version or update your Flash plugin.