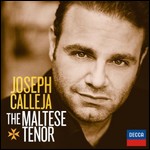 Joseph Calleja, (born 22 January 1978, Attard), is a Maltese tenor. He began singing at the age of 16, having been discovered by Tenor Brian Cefai and continued his studies with Paul Asciak. At 19, he made his operatic debut as Macduff in Verdi's Macbeth at the Astra Theatre in Gozo and went on to become a prize winner at the Belvedere Hans Gabor competition the same year. In 1998, he won the Caruso Competition in Milan and was a prize winner in Plácido Domingo's Operalia International Opera Competition in 1999.[1] He has since been considered one of the most promising young tenors of the 21st century.[2]

On 2 November 2012, the University of Malta presented Joseph Calleja with a Doctor of Literature Honoris Causa in acknowledgment of his achievements as an internationally renowned tenor.[3]

In July 2011, Joseph Callejas third solo album Joseph Calleja The Maltese Tenor reached second overall position on the German charts[4] and debuted at number one in the US Billboard Classical Traditional chart.[5] It captured the development of his art and presents him in some of the roles he is currently performing to ecstatic critical responses: "All the ardor and beauty of tone one could wish for...one of the finest lyric tenors before the public today" (Houston Chronicle on recent performances of Puccini's Madama Butterfly).[6]

Joseph Calleja was named Gramophone Artist of the Year in 2012. In the same year, Calleja was selected to serve as Maltas first cultural ambassador and was also named a brand ambassador for Air Malta one year later. In 2013, he teamed up with Maltas Bank of Valletta to form the BOV Joseph Calleja Foundation, which will serve to help children and families in need.

Calleja made a guest appearance on Renée Fleming's album By Request, singing the role of Alfredo in the act 1 closing scene of La traviata. His recording of "La donna è mobile" from Verdi's Rigoletto was featured in the soundtrack for the 2007 film No Reservations, starring Catherine Zeta-Jones.

The Golden Voice and Tenor Arias both captured critical and popular acclaim, and both were named Editors Choice in Gramophone magazine.

This article uses material from the article Joseph Calleja from the free encyclopedia Wikipedia and it is licensed under the GNU Free Documentation License.

Growing Older Liv Summer
Update Required To play the media you will need to either update your browser to a recent version or update your Flash plugin.