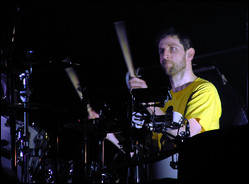 Richard David Hughes (born 8 September 1975, Gravesend, Kent) is an English musician, best known as the drummer of the British piano rock band Keane. He is the eldest member of the band.

Hughes attended Tonbridge School where he was friends with Tim Rice-Oxley and Dominic Scott. At the age of seventeen, he learned to play the drums, and when Scott and Rice-Oxley formed a small covers band in 1995 he was invited to join as drummer. They later invited present vocalist Tom Chaplin to join the band, although Hughes initially objected, later stating, "The idea of giving someone who's already the loudest person you know a microphone was not something that I was particularly keen on."

Hughes then went to university at University College London where he received a degree in Geography. He took a job as a secretary at the BBC in order to support himself and the band while they lived and practiced in a flat on Upper Clapton Road in London. He also had a job as a supply teacher for a short time. It has been said that the song 'Put it Behind You' was written by Rice-Oxley for Hughes after he had broken up with a girlfriend, and that much of the album 'Perfect Symmetry' - in particular the track 'You Don't See Me' - was also written about him and his unrequited love for a music journalist who broke his heart by marrying another man. Hughes, however, has since denied these claims. Hughes is known to be the most humorous member of the band. Since Under the Iron Sea was released he has provided additional backing vocals for the band. He was married, presumably to his long-time girlfriend, in 2010.

From Under the Iron Sea (2006) has collaborated with his voice in several songs Additional choruses, for example Atlantic, Leaving So Soon and Nothing In My Way. However, it was not until the recording of Under Pressure, The Sun is Not Gonna Shine Anymore and Early Winterthat his voice was more noted. In the album Perfect Symmetry is heard more singing vocals and choirs as in the chorus of the same song Perfect Symmetry along with Tim Rice-Oxley and Jesse Quin.

The cameras collect brand "Nikon", does call himself as "Nikon Guy". It is a great lover of photography and generally update the site Keane with "photoblogs" in which goes up photographs of the band on tour. He is a fan of the Irish U2, and other bands and groups like The Smiths, The Beatles and Björk. His favorite song from the album Hopes and Fears is Bend and Break and the album Under the Iron Sea is Put it Behind You. Also noteworthy is that Richard is green and brown colourblind, as said in a video where Richard answers 50 fan questions (can be found on the band´s YouTube channel.)

Group took the initiative to participate in War Child (foundation to help children in countries at war). It is an activist who defends human rights, together with Amnesty International. It is also very involved in the case of Troy Davis, leading sometimes even T-shirts with the message "I am Troy Davis" during his tour in the United States. Richard is also a great animal advocate and claims to be a vegetarian since age 13.

This article uses material from the article Richard Hughes (musician) from the free encyclopedia Wikipedia and it is licensed under the GNU Free Documentation License.

Atop The Rose Symon Marcus
Update Required To play the media you will need to either update your browser to a recent version or update your Flash plugin.