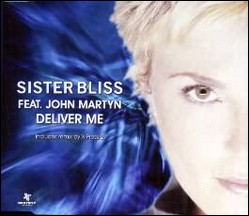 Sister Bliss (real name Ayalah Bentovim, born 30 December 1970) is a British keyboardist, record producer, DJ, composer and songwriter. In the studio she is best known for her work with Rollo Armstrong, particularly as part of the now disbanded dance group Faithless.

She started music at the age of five, when she learned how to play the piano. She eventually moved on to the violin, saxophone and then bass.

She formed Faithless in 1995 with Rollo, Jamie Catto and Maxi Jazz. Bliss constructed most of the music of Faithless herself electronically, but also played the piano, violin, saxophone and bass guitar. Various others have been members and collaborators over the years including Zoë Johnston and, frequently, Rollo's sister Dido, who began her musical career providing backing vocals for the band. Faithless toured extensively, and while Rollo preferred to stay in the studio, Sister Bliss could be seen on stage with Maxi Jazz.

She released a two-disc compilation entitled Headliners: 02 in 2001.

On 10 September 2006 she gave birth to a baby boy named Nate. The track "Nate's Tune" found on the Faithless album To All New Arrivals is dedicated to him. Later on, Faithless founded their own record label called Nate's Tunes.

This article uses material from the article Sister Bliss from the free encyclopedia Wikipedia and it is licensed under the GNU Free Documentation License.