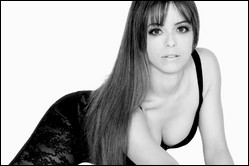 Tina Ann Barrett (born 16 September 1976[1]) is an English dancer, singer-songwriter and actress. Her major breakthrough came in 1999 when she became a member of the pop group, S Club 7, where she enjoyed five years of hit singles, arena tours and awards.[2][3][4][5]

Barrett was born to an English father and Guyanese mother. She was at London's Arts Educational School for a period of eight years. Her first job was dancing in a pantomime with Lionel Blair. She was originally going to be in the group Face 2 Face, which later went on to become Mis-Teeq. She assisted with the group's choreography during her time there.

In 1996, Barrett, Alesha Dixon and Sabrina Washington became friends in a dance studio in Fulham.[6] The trio, named Face2Face, performed singing and dancing.[7] The group had started work on their debut album when Barrett left to join S Club 7 after a successful audition for Simon Fuller.[7] After her departure, the group changed their name to Mis-Teeq and replaced her with two new members, Su-Elise Nash and Zena McNally.

Barrett became a member of S Club 7 after a series of auditions, along with members Paul Cattermole, Jon Lee, Bradley McIntosh, Jo O'Meara, Hannah Spearritt and Rachel Stevens in 1999.[8] During five years they released four number one singles and one number one album. They also had a series of TV shows, which were: Miami 7, L.A. 7, Hollywood 7 and Viva S Club, and they also starred in a film, Seeing Double. Barrett led some of the tracks on the groups' albums, such as "I'll Be There" and "Stronger". Stronger was set to be a single, but was canceled when Paul Cattermole left the group. Barrett co-wrote two other songs that she also led: "Discotek" (the B-side to the single Alive) and "Secret Love", a song from the group's final album Seeing Double. The six remaining members stayed together until 2003, when they split after releasing their greatest hits album.

When S Club first announced they were to break up, she expressed interest in working on a solo career.[9] However, there was no information about Barrett beginning a career as a solo artist.[10] In 2004, Barrett, along with singers Natasha Bedingfield and Atomic Kitten member Liz McClarnon, recorded a single, a cover of Do Ya Think I'm Sexy? by Rod Stewart. She kept a relatively low profile for about six years after the split.

In May 2012, a teaser video for "Fire" was released on YouTube and a short clip of the still unfinished video was shown during an interview on LIVE! . The final version of the music video was finally released on 27 September 2012. Barrett announced that her debut album would be released in the end of 2013 and that she intends to tour with the album, but the album has not yet materialised. Tina has also appeared in other music videos which include Russell Grant's version of "The Clapping Song" and as the main dancer in Asian artist Navin Kundra's song 'Shudaayi'. Barrett is also heard in a song called "Boom" by 'Old Boy' which also features rapper Nasty Jack; an accompanying music video has been shot but has not yet been released.[11] Barrett performed with O'Meara, McIntosh and Cattermole at Birmingham Pride 2014 and various events after that, the group was known as S Club 4.[12] In November 2014, Tina reunited with all six other members of the group for a medley of S Club's greatest hits on BBC Children In Need. Later, the group announced a sold out arena reunion tour, titled Bring It All Back 2015, which toured the UK in May 2015.

This article uses material from the article Tina Barrett from the free encyclopedia Wikipedia and it is licensed under the GNU Free Documentation License.