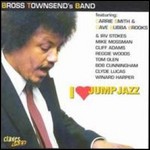 Townsend was born in Princeton, Kentucky. His father was also a pianist, who started his son on the instrument at age seven. He moved to Cleveland in 1933 and attended the Cleveland Institute of Music. He accompanied local singers such as Little Jimmy Scott and Wynonie Harris and played freelance from 1953 with Gene Ammons, John Coltrane, Memphis Slim, and Jimmy Reed. He made several tours of Europe as a solo performer.

Townsend was active in New York City from 1959 almost up until his death there in 2003; he worked with Warren Smith (in the Composer's Workshop Ensemble), Carrie Smith, Bubba Brooks, Woody Herman, Diana Ross, Kalaparusha Maurice McIntyre, Arvell Shaw, Bob Cunningham, and Bernard Purdie, in addition to performing solo. Townsend went blind in the middle of the 1990s but continued to perform.

His only album as a leader was 1995's I Love Jump, released on Claves Jazz.

This article uses material from the article Bross Townsend from the free encyclopedia Wikipedia and it is licensed under the GNU Free Documentation License.

Promises Eric Clapton
Update Required To play the media you will need to either update your browser to a recent version or update your Flash plugin.