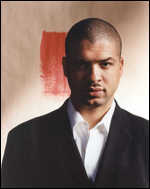 Jason Moran (born January 21, 1975, in Houston, Texas) is a jazz pianist and composer.[1][2] He is musical adviser for jazz at the Kennedy Center.

Moran debuted as a band leader with the 1999 album Soundtrack to Human Motion. Since then, he has garnered much critical acclaim and won a number of awards for his playing and compositional skills, which combine elements of stride piano, avant-garde jazz, classical music, hip hop, and spoken word, among others.[3] In 2010, he was named a MacArthur Fellow.[4][5][6]

Growing up in Houston, Texas, Moran began playing the piano when he was six, though he had no love for the instrument until, at the age of 13, he first heard the song "Round Midnight" by Thelonious Monk and switched his efforts from classical music to jazz. He attended Houston's High School for the Performing and Visual Arts, and then enrolled at the Manhattan School of Music, where he studied with pianist Jaki Byard. While still in college, Moran also received instruction from other avant-garde pianists, including Muhal Richard Abrams and Andrew Hill.

In 1997, when Moran was a senior at Manhattan School of Music, he was invited to join the band of saxophonist Greg Osby for a European tour. Osby liked his playing, and Moran continued to play with Osby's group upon their return to the United States, making his first recorded appearance on Osby's 1997 Blue Note album Further Ado (he would subsequently appear on several other Osby albums). This led to Moran signing a contract of his own with Blue Note. Soundtrack to Human Motion was released in 1999. Moran was joined on the album by Osby, drummer Eric Harland (a classmate of Moran's at the Manhattan School), vibraphonist Stefon Harris and acoustic bassist Lonnie Plaxico.

Moran's next album, 2000's Facing Left, used a trio of Moran, bassist Tarus Mateen and drummer Nasheet Waits. The same group, which came to be known as The Bandwagon, was joined by saxophonist and pianist Sam Rivers for their next album, Black Stars, which appeared in 2001.

In 2002, Moran released a solo album, Modernistic, and followed it in 2003 with a live trio album, recorded at New York's Village Vanguard, called The Bandwagon: Live at the Village Vanguard.[7] The 2005 album Same Mother, Moran's exploration of the blues, brought guitarist Marvin Sewell into the Bandwagon mix. Moran's 2006 release, Artist In Residence, included a number of works commissioned by the Walker Art Center, the Dia Art Foundation, and Jazz at Lincoln Center.

Besides his recordings under his own name, Moran has also played and recorded with a range of other artists including Charles Lloyd, Cassandra Wilson, Joe Lovano, Don Byron, Steve Coleman, Lee Konitz, Von Freeman, Christian McBride and Ravi Coltrane. He has won a number of awards, including The Jazz Journalists Association's "Up-n-Coming Jazz Musician" award in 2003. The Down Beat critics poll voted him Rising Star Jazz Artist, Rising Star Pianist, and Rising Star Composer for three years straight (200305). In 2005, Moran was also named Playboy magazine's first "Jazz Artist of the Year". In 2007, Moran was named a USA Prudential Fellow and granted $50,000 by United States Artists, an arts advocacy foundation dedicated to the support and promotion of America's top living artists.

Moran's current projects include IN MY MIND, a multimedia presentation inspired by Thelonious Monk's 1959 "large band" concert at The Town Hall in New York City. He is scheduled to premiere his composition, "Slang", at the 16th Other Minds Festival in San Francisco. He also currently serves on the faculty at the New England Conservatory of Music, and the Manhattan School of Music, taking over the position occupied by his former teacher, Jaki Byard.

Moran played piano as a guest on "Prelude: Light No Lamp", a track on Joe Henry's 2009 album Blood from Stars.

This article uses material from the article Jason Moran (musician) from the free encyclopedia Wikipedia and it is licensed under the GNU Free Documentation License.

I Can't Stand The Rain Eruption
Update Required To play the media you will need to either update your browser to a recent version or update your Flash plugin.