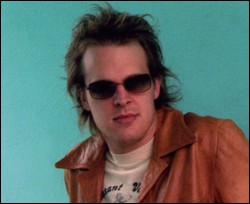 Joe Bonamassa (born May 8, 1977) is an American blues rock guitarist, singer and songwriter.

When he was 12 years old, Bonamassa opened for B.B. King.[2] In the last 13 years Bonamassa has put out 15 solo albums through his independent record label J&R Adventures, of which 11 have reached number 1 on the Billboard Blues charts.[2][3]

Bonamassa has played alongside such artists as Stephen Stills, Eric Clapton, Blondie Chaplin, Foreigner, Buddy Guy, Steve Winwood, Warren Haynes, and Derek Trucks among others.[4] His career highlights include performances at the Royal Albert Hall and a Grammy Award nomination in 2013. In addition to his music career, Joe Bonamassa runs a nonprofit organisation called the Keeping the Blues Alive Foundation, whose mission it is to further music education by funding scholarships and providing music education resources to schools in need.

Bonamassa was born in New Hartford, New York. He started playing guitar at age four, encouraged by his father, who was an avid music fan and exposed him to British blues rock records by Eric Clapton and Jeff Beck, greatly inspiring him. At 11 years old Joe was mentored and trained by American guitar legend, Danny Gatton. When he was 12 years old, he had his own band called Smokin' Joe Bonamassa, which gigged around western New York and Pennsylvania, including cities such as Scranton and Buffalo, but only on weekends since Joe had school on weekdays. Bonamassa played a crimson 1972 Fender Stratocaster he called "Rosie", which his father had bought in Utica, New York.

Bonamassa opened for B.B. King at approximately 20 shows in 1989.[5] Before he reached 18 years old, Bonamassa was playing in a band called Bloodline with the sons of Miles Davis, Robby Krieger, and Berry Oakley. Although Bloodline did not become a famous act, it attracted some attention to Bonamassa's guitar chops.[6]

Bonamassa's debut studio album A New Day Yesterday was released in 2000, and features both original tunes and covers of such artists as Rory Gallagher, Jethro Tull, and Warren Haynes.[7] The album features a guest appearance by Gregg Allman on the tune "If Heartaches Were Nickels" and was produced by Tom Dowd.[8] The album reached number 9 on the Billboard Blues chart.[9]

Between 2002 and 2006, Bonamassa saw three studio albums hit number 1 on the Billboard Blues charts, and all five of his solo studio albums made the top 10.[10]

In 2009 Bonamassa fulfilled one of his childhood dreams by playing at the Royal Albert Hall in London, where Eric Clapton played a duet with him.[11]

Bonamassa's live album Beacon Theatre–Live from New York was released in 2012. The show featured one of Bonamassa's musical heroes, Paul Rodgers, formerly of the bands Free and Bad Company, as a guest.[6]

March 26, 2013 saw the release of his live acoustic album An Acoustic Evening at the Vienna Opera House, which was released as a CD/DVD/Blu-ray set.This concert marked the first time Bonamassa played a wholly acoustic show. The acoustic ensemble that performed the show was assembled with the help of Bonamassa's longtime producer, Kevin Shirley.[12]

Over the summer of 2013, Bonamassa performed four shows in London featuring three different bands and, at one show, a horn section, covering four different sides of his music. Each show had a unique setlist. The shows were recorded for a DVD release and the set of DVDs was released in October, 2013 under the name "Tour de Force."[13]

On December 6, 2013, Bonamassa and Beth Hart were nominated for a Grammy Award for their 2013 collaborative album SeeSaw in the Best Blues Album category.[14]

Bonamassa's album Different Shades of Blue is his first solo studio album since So, It's Like That to showcase only original songs, except for one short instrumental Jimi Hendrix cover. The Hendrix cover is a 79-second partial performance of "Hey Baby (New Rising Sun)."[15][16] To write the album, Bonamassa went to Nashville and collaborated with three songwriters there: Jonathan Cain, who has written for Journey; James House, known for his work with Diamond Rio, Dwight Yoakam, and Martina McBride; and Jerry Flowers, who has written for Keith Urban. Bonamassa explained to the writers that he wasn't interested in creating three-minute radio hits, but just wanted to write some serious blues rock.[17] The recording of the album was accomplished in Las Vegas at a music studio in the Palms Hotel.[15] On the charts, the album reached number 8 on the Billboard 200, number 1 on the Blues Chart, and number 1 on the Indie Chart as well.[18]

In May 2015 Bonamassa won a Blues Music Award in the 'Instrumentalist - Guitar' category.[19]

Bonamassa was first exposed to Beth Hart's music after seeing her play several television performances. The two would often cross paths when playing shows separately in Europe, and Bonamassa became very impressed with Hart when he caught her show at the Blue Balls festival in Lucerne, Switzerland. While recording his album Dust Bowl and listening to the expanded edition of the Rolling Stones' Get Yer Ya-Ya's Out! that features tracks by Ike and Tina Turner, Bonamassa became inspired to try pairing up with a woman, and Beth Hart came to mind. The two musicians met up in a hotel bar in Dublin and soon Bonamassa floated the idea, which Hart accepted immediately, although she was at first under the impression that he was asking her to sing backup vocals on his next album. When she realized that his intention was for her to sing lead vocals, she said "I was floored".[20]

Bonamassa, Hart, and producer Kevin Shirley wrote down lists of soul songs they liked to come up with material for the album, which was named Don't Explain. The group settled on twelve songs, although only ten ended up being recorded. Bonamassa and Hart chose five songs for the album each.[21] Some of Hart's favorite tracks on the album, included "For My Friend" by Bill Withers and "Sinner's Prayer" by Ray Charles. Bonamassa had always wanted to do versions of Brook Benton's "I'll Take Care of You" and "Well Well" written by Delaney Bramlett & Bonnie Bramlett.

Their follow-up album, Seesaw was nominated for a Grammy Award in the category of Best Blues Album.[22]

Bonamassa serves as the guitarist for the hard rock supergroup Black Country Communion. The band released their fourth studio album, "BCCIV" in September 2017.[25]

Bonamassa produced podcasts between January and July 2015 with another guitar aficionado, Matt Abramovitz. The episodes are about "the life and lore of the guitar", with Bonamassa and Abramovitz going in depth about their favorite guitars, guitarists and occasionally non-guitarists associated with the blues and rock genres.[27]

Unlike many blues rock guitarists that came before him, Bonamassa's influences are British and Irish blues acts rather than American artists. In an interview in Guitarist magazine he cited three albums that had the biggest influence on his playing: John Mayall & the Bluesbreakers with Eric Clapton (the Beano album), Rory Gallagher's Irish Tour and Goodbye by Cream.[28] He also noted that Stevie Ray Vaughan's Texas Flood had a big influence when Bonamassa was young. Among other bands, he listed the early blues playing of Jethro Tull as an influence, and named both Martin Barre and Mick Abrahams as important musicians to him.[29][30]

He elaborated on his influences in a 2007 interview:

"You know, my heroes were the Columbia guys – Paul Kossoff, Peter Green, Eric Clapton. There’s so many – there’s Gary Moore, Rory Gallagher – another Irish musician who played the same things, but don't tell him that. But those guys were my guys – Jeff Beck, Jimmy Page. There's a certain sophistication to their approach to the blues that I really like, more so than the American blues that I was listening to. B.B. King's a big influence – he's probably my biggest traditional influence. I love Muddy Waters, Robert Johnson and T-Bone Walker and stuff like that, but I couldn't sit down. I was always forcing myself to listen to whole records by them, where I'd rather listen to Humble Pie do "I'm Ready" than Muddy Waters, you know? I think, the English interpretation of the blues just hit me a lot better, you know?"[31]

In an October 2008 interview with Express & Star he said:

And in an December 2012 interview with MusicRadar:

"My friends would ask me, 'Have you heard the new Van Halen record?' And I'd be like, 'Nope.' I was listening to Frank Marino and Mahogany Rush".[32]

This article uses material from the article Joe Bonamassa from the free encyclopedia Wikipedia and it is licensed under the GNU Free Documentation License.