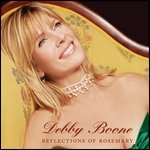 Deborah Anne "Debby" Boone (born September 22, 1956),[1] is an American singer, author, and actress. She is best known for her 1977 hit, "You Light Up My Life", which spent ten weeks at No. 1 on the Billboard Hot 100 chart[2] and led to her winning the Grammy Award for Best New Artist the following year.[3] Boone later focused her music career on country music resulting in the 1980 No. 1 country hit "Are You on the Road to Lovin' Me Again". In the 1980s, she recorded Christian music which garnered her four top 10 Contemporary Christian albums as well as two more Grammys. Throughout her career, Boone has appeared in several musical theater productions and has co-authored many children's books with husband, Gabriel Ferrer.

Debby Boone was born in Hackensack, New Jersey, the third of four daughters born to singer-actor Pat Boone and Shirley Foley Boone, daughter of country music star Red Foley. When Boone was 14 years old, she began touring with her parents and three sisters: Cherry, Lindy, and Laury. The sisters first recorded with their parents as The Pat Boone Family and later as the Boones or Boone Girls. They primarily recorded gospel music, although the sisters also released singles for the Motown and Curb labels that were remakes of secular pop music featuring Debby as the lead vocalist.

"You Light Up My Life"

With her older sisters married and younger sister Laury in college, Boone was actively encouraged by producer Mike Curb to launch a solo career. Boone released her first solo effort, "You Light Up My Life" (which had been featured in the film of the same name) in 1977. The song became the biggest hit of the 1970s[4] spending ten consecutive weeks at No. 1 on the Billboard Hot 100 — longer than any other song in Hot 100 history to that point.[5] (In 2008, Billboard ranked the song No. 7 among all songs that charted in the 50-year history of the Hot 100.) The song earned Boone a Grammy Award for Best New Artist and an American Music Award for Favorite Pop Single of 1977.[6] She also received Grammy nominations for Best Pop Vocal Performance – Female and Record of the Year won by, respectively, Barbra Streisand ("Love Theme From "A Star Is Born" (Evergreen)") and the Eagles ("Hotel California"). "You Light Up My Life" also succeeded on Billboard's Adult Contemporary (No. 1 for one week) and Country (No. 4) singles charts.[7] The single and the album (No. 6 Pop, No. 6 Country) of the same name were both certified platinum.

The song, written and produced by Joe Brooks, was from the film of the same name. Brooks earned Song of the Year awards at both the 1978 Grammys[8] and Oscars[9] for writing the song. (Boone performed the song at both awards shows.) Boone's version was not used in the movie or featured on its soundtrack. The song was lip-synched in the film by its star, Didi Conn, performing to vocals recorded by Kacey Cisyk.[10] It was written as a love song, but Boone interpreted the song as inspirational and stated that she recorded the song for God.[11]

Boone's overnight success led to a tour with her father[5] and frequent television appearances, but she was unable to maintain her success in pop music after "You Light Up My Life". Her follow-up single, "California" (also written and produced by Joe Brooks), peaked at No. 50 Pop and No. 20 AC.[2] "California" was included on Boone's second album, Midstream, which faltered at No. 147 Pop. Her next single, the double-sided "God Knows"/"Baby I'm Yours", also struggled, peaking at No. 74 Pop, becoming her last entry on the Hot 100.[2] However, the single charted AC (No. 14) and returned Boone to the country chart (No. 22). Boone then released another movie theme, "When You're Loved", from The Magic of Lassie. Like "You Light Up My Life", the song was nominated for an Academy Award for its composers, the Sherman Brothers,[11] but it failed to replicate the success of her first single charting only No. 48 AC. Boone's wholesome persona contrasted with the image-conscious pop-music industry, leading her career in different musical directions.

With the crossover success of "You Light Up My Life" and "God Knows/Baby, I'm Yours", Boone began to focus on country music.[12] (Her father, Pat, and maternal grandfather, Red Foley,[12] had also recorded in that genre.) Her first country single, "In Memory of Your Love" (1978), fizzled at No. 61. But, she then hit No. 11 in 1979 with a remake of Connie Francis' "My Heart Has a Mind of Its Own".[7] Boone released another Connie Francis cover, "Breakin' in a Brand New Broken Heart" (No. 25),[7] before releasing her 1979 eponymous album. Although the album included the two Francis remakes, her next two singles were not culled from this album – a remake of the Happenings' "See You in September" (No. 41 Country, No. 45 AC) and yet another Francis cover, "Everybody's Somebody's Fool" (No. 48). (To date, "See You in September" has never been featured on any of Boone's albums, while "Everybody's Somebody's Fool" was included on her 1986 compilation, The Best of Debby Boone.)

Boone turned her music career to contemporary Christian music winning two GMA Dove Awards[14] and two more Grammys.[15] Boone first recorded in this genre in 1980 with the Grammy winning With My Song. Subsequent Christian albums included Surrender (1983), Choose Life (1985), Friends For Life (1987), and Be Thou My Vision (1989).

In 1989, Boone released her Christmas album Home For Christmas, which boasted a duet with her mother-in-law, Rosemary Clooney, of Clooney's signature White Christmas.

During 1981–82, Boone toured the United States in a production of the stage adaptation of the film Seven Brides for Seven Brothers. The play was a commercial and critical success nationwide before opening on Broadway in July 1982. The Broadway reviews were lackluster,[16] but a scathing review by The New York Times led the show to close after just five performances. The day after the show's closing, several of the show's stars and theatergoers protested the closing outside the New York Times' building, hoping for a retraction of its review and the re-opening of the show. But, despite the enthusiastic reception of the show from Broadway theatergoers, the producers believed that the show could not overcome its reviews and the show remained closed.

Boone continued her theater work, appearing periodically in stage productions nationwide including lead roles in Camelot, Meet Me in St. Louis,[6] Mississippi Love,[17] South Pacific, The Human Comedy,[18] and The King and I.[9] Boone returned twice to the New York stage. She starred as Maria in the 1990 Lincoln Center production of The Sound of Music, which was nominated as Outstanding Musical Revival by the Drama Desk Awards.[19] In 1996, Boone played against her image as Rizzo in the 1990s revival of Grease.[20]

In 1978, Boone made her first foray into television with a musical adaptation of O. Henry's The Gift of the Magi co-starring John Rubinstein. She also headlined two of her own NBC television music specials – The Same Old Brand New Me (1980)[21] and One Step Closer (1982).[21] In 1984, Boone appeared in the television movie Sins of the Past co-starring Anthony Geary, Barbara Carrera and Kim Cattrall. In the film, Boone portrayed Clarissa Hope, a young prostitute who leaves her job after a fellow prostitute is murdered, and subsequently reforms herself as a Christian music singer.[1] The film was a Top 10 Nielsen hit. Boone has since made guest appearances on several television shows including Step by Step and Baywatch Nights and was featured in the television films Come on, Get Happy: The Partridge Family Story and Treehouse Hostage.

Once her children were grown, Boone revived her recording career in 2005 with the release of Reflections Of Rosemary.[9] The CD was a fond tribute to her mother-in-law, Rosemary Clooney, featuring songs performed by Clooney as well as other songs not associated with Clooney which Boone felt showed her as the person she and her family knew and loved. Boone toured extensively for the album, including several nights at New York's famed cabaret, Feinstein's, where Clooney had often performed.[22] In 2011, Boone released an album—and subsequent concert tour—called Swing This!, celebrating the swing music and culture of 1960s Las Vegas.[23]

In 2012, Boone's profile, as well as her most popular hit song, were enhanced when she became the official spokesperson for Lifestyle Lift, a company that provides facial and neck cosmetic procedures.[24] She appears in extended TV commercials and hosts a 30-minute infomercial. In all promotions, her signature song, "You Light Up My Life", is pervasively featured throughout. In the infomercial, Boone is portrayed recording the song, because she indeed re-recorded the 35-year-old song, with full orchestration. However, at no time does the songstress state that she has personally utilized the company's services.

Boone married Gabriel Ferrer on September 1, 1979.[8] He is an ordained Reverend in the Episcopal Church.[25] Like Boone, Ferrer is a member of another well-known Hollywood family. He is the son of Jose Ferrer and Rosemary Clooney, the brother of actors Miguel Ferrer and Rafael Ferrer, the nephew of journalist Nick Clooney and the cousin of actor George Clooney. The couple has four children: son Jordan (born 1980), twin daughters Gabrielle and Dustin (born 1983), and daughter Tessa (born 1986).[5]

Boone and her husband collaborated on several children's books, which were all illustrated by Ferrer.

The Snow Angel was released both in book form and in a special audio edition featuring original songs by Mari Falcone, Boone's musical director for many years. Boone also released the two-volume children's video series entitled Debby Boone's Hug-a-Long Songs. She and her children appeared frequently on the cover of Good Housekeeping magazine during their childhood.[27]

This article uses material from the article Debby Boone from the free encyclopedia Wikipedia and it is licensed under the GNU Free Documentation License.