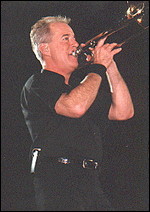 Born in St. Louis, Missouri, Pankow moved with his family to Park Ridge, Illinois at the age of eight, where he started playing the trombone at St. Paul of the Cross Elementary School. He is the older brother of veteran actor John Pankow, and is of German and Irish descent.[1]

Pankow earned a full music scholarship to Quincy College, where he studied the bass trombone. After completing his freshman year, he returned home for the summer and formed a band that began to play some live local shows. Not wanting to give up this work, Pankow transferred to DePaul University.

He is also a member of Phi Mu Alpha Sinfonia, and was given the National Citation as well as recognition as Signature Sinfonian along with fellow Chicago members and Sinfonians on August 26, 2009.[2]

Since the early 1970s he has been a close friend of ex-Eagles guitarist Don Felder, as stated in Felder's autobiography.

In addition to playing the trombone, Pankow has composed many songs for Chicago, including the hits "Make Me Smile" and "Colour My World" (both from his suite Ballet for a Girl in Buchannon), "Just You 'N' Me," "(I've Been) Searchin' So Long," "Old Days," "Alive Again," and (with Peter Cetera) "Feelin' Stronger Every Day."

Pankow has also composed most of Chicago's brass arrangements over the years.

Although Pankow is not one of the band's principal vocalists, he sang lead vocals for two Chicago songs: "You Are On My Mind" (from Chicago X, 1976) and "Till the End of Time" (Chicago XI, 1977).

Along with fellow Chicago horns Lee Loughnane and Walter Parazaider, Pankow was featured on Three Dog Night's 1969 #15 hit "Celebrate" and on several tracks of the 1979 Bee Gees' Spirits Having Flown album. Pankow has appeared on several albums for the rock band Toto, including the 1982 Grammy Award winning Toto IV and their 2006 album Falling In Between, for which he composed the brass arrangements and performed on the song "Dying On My Feet."[3]

This article uses material from the article James Pankow from the free encyclopedia Wikipedia and it is licensed under the GNU Free Documentation License.

If I Could Turn Back Time Cher
Update Required To play the media you will need to either update your browser to a recent version or update your Flash plugin.