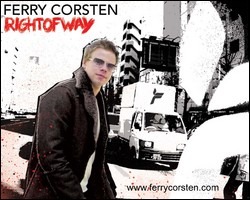 Ferry Corsten (born 4 December 1973), also known under the alias System F, is a Dutch producer of electronic dance music, in addition to being a DJ and remixer. He also hosts his own weekly radio show, Corsten's Countdown. He routinely plays at events all over the world with crowds in excess of tens of thousands. In 2009 Ferry Corsten ranked #7 on DJ Magazine's annual Top 100 DJ Poll, dropping to #9, #18, #22, and #42 in subsequent years.[1]

Ferry Corsten was born in Rotterdam, Netherlands. He has produced and remixed under many aliases since the release of his first record at the age of sixteen,[2] but he officially started to work as a musician when he was 17 years old. As a teenager he saved money to buy his first keyboard by washing cars, and selling mix tapes to kids in his neighbourhood. He later began to perform live performances with a friend and won his first award "De Grote Prijs van Nederland" at the Netherlands in 1995.[3] He eventually released a record with a couple of friends when he was just sixteen years old and later began releasing self-made productions while he grew up in Rotterdam in the 1990s, producing underground hardcore gabber tracks, later expanding into club-house and trance music. His first single to reach a chart position was "Don't Be Afraid" under the alias Moonman, which was only the start for becoming a composer as well. In 1997 Corsten and his partner Robert Smit established a dance label named Tsunami with the Dutch based dance company Purple Eye Entertainment b.v., this junction made the creation of another label possible; Polar State.[4] Ferry Corsten was studying to become an Electrical Engineer, so he went to the Technical Training School and after that Higher Technical Education.[5]

In February 1999 Corsten's second solo project, System F, was released on the Tsunami imprint along with the album Out of the Blue, including the same-named melodic tune that became a hit on dance floors all over the world, achieving a top twenty position in the United Kingdom single chart. The follow-up single was "Cry", produced together with Robert Smit which reached the UK Top 20.[4]

His growing popularity in the late 1990s led to cooperation with many famous trance DJs and musicians like DJ Tiësto (Gouryella, Vimana), Vincent de Moor (Veracocha), and Robert Smit (Starparty). The track "Gouryella" by the act Gouryella was released in May, the single entered the UK Singles Top 75 at number fifteen and achieved various hit positions throughout the world. The next single was entitled "Walhalla" which entered the UK single chart at number twenty-seven. In 1999 Ferry was elected as producer of the year at the Ericsson Muzik Award in London.[2] In September 2000 the third Gouryella single entitled "Tenshi" was released. In 2000, Corsten also remixed William Orbit's "Adagio for Strings" as well as "New Year's Day" for U2. His remix of Barber's "Adagio For Strings" was awarded at the Dancestar 2000 awards. The Ministry of Sound dance compilation series entitled Trance Nation became one of the best selling dance compilations in the UK and was awarded the platinum status.[4] In 2000 in his home country Corsten got awarded the Silver Harp award for his numerous outstanding contributions made to Dutch dance music.

In 2002 Ferry contributed to remix projects of tracks by Japanese superstar Ayumi Hamasaki. He went on to compose and arrange her heavily trance-based song "Connected," which was released in 2003, along with remixes, as a single in Germany which has sold 4 million copies, making this one of Ferry's most successful songs.[2]

Ferry Corsten is the electronic dance music artist with the highest amount of dance singles in the UK charts. He has 10 gold singles, between those his 1999 remix of "Madagascar", "Out of the Blue" as his alias System F, both "Gouryella" and "Walhalla" in 2000, "Cry" and the "Dance Valley Theme" in 2001 with "Exhale" which is his latest as System F with Armin van Buuren; and his 2003-2004 singles "Punk" and "Rock Your Body Rock".

In 2003 he launched his first album as Ferry Corsten, Right of Way, in Heineken Musical Hall with 4,500 clubbers at his eight-hour set.[6] The music video of the song was nominated in the TMF Dutch MTV Awards in Netherlands. The album spawned three singles, "Punk" (UK #29), "Rock Your Body, Rock" (UK #11), and "It's Time" (UK #51). "Rock your body Rock" was voted biggest hit by BG Magazine in The Netherlands and reaches the top 10 in the UK.

In 2004, he produced and performed the single "Everything Goes" for the TMF Dutch Awards.

In 2005, Corsten founded his own record label, titled Flashover Recordings and released his 2nd artist album L.E.F., And he released his concept L.E.F. worldwide. In this year he was number 5 in the DJ MAG Top 100.

His track "Fire" was nominated in the best trance video category for the[7] 2006 Trance Awards.In the DJ MAG Top 100 he was number 6 this year.

In 2006 Ferry Corsten performed at a concert in El Salvador in September and he did his Road to Voodoo Bus Tour: 20 states, 27 cities in 5 weeks.

The single "Junk" with vocals by Guru (Gangstarr)  top 20 charts the Netherlands was released in 2006.

On 4 July 2007, Corsten debuted his new weekly radio show titled "Corsten's Countdown" which counts down a list of the highest voted trance tracks.

In 2007 was the successful 1st edition of Full on Ferry Concert Ahoy' Stadium Rotterdam (cap:12.000) and he produced the 1st official anthem for Bavaria City Racing in 2007 (F1 demonstration in the center of Rotterdam with more than 500.000 spectators. Official opening of the event by Ferry Corsten and the prime minister of The Netherlands, Jan Peter Balkenende).

He was dubbed the King of Crossover in an August 2007 interview on UK clubbing website HarderFaster.net, reflecting his recent L.E.F. (Loud Electronic Ferocious) style, which some hail as a new direction in dance music. Corsten describes it as "everything from electro house, trance and techno".

Ferry Corsten's third album, Twice in a Blue Moon, which made its debut at the 2nd edition of the Full on Ferry event at Ahoy in Rotterdam, was released on 1 November 2008. The first single from the album, Radio Crash, has been played by Tiësto, Armin van Buuren, Paul van Dyk, Above & Beyond and many other DJ's globally. The track has been a huge hit in clubs across the world and gave Ferry a good start in promoting his new album. He also released the single "Into the Dark" feat. Howard Jones (March 2008).

In 2008, Ferry Corsten was the first DJ ever to be named Ambassador of Freedom by Dutch Liberation Day Comity.

A remixed edition of Twice in a Blue Moon includes remixes by Rafael Frost, Lange, Ummet Ozcan, Markus Schulz and many more. The countries he visited during Twice in a Blue Moon: The Experience have included; Australia, the United States, Romania, Brazil, and Lebanon with debut show on May 29 in Mallaca, Malaysia.

This year also was the third edition Full on Ferry  The Masquerade in association with UDC on October 17, 2009, at Ahoy' Rotterdam.

In 2009 Ferry Corsten released two singles: "We Belong" from the album Twice in A Blue Moon (Date of release: May 25, 2009) and "Made of Love" from the album Twice In A Blue Moon  top 40 Dutch charts / Radio 538 Dance Smash / No.2 in UK Club Charts (Date of release: Valentine's Day 2009). And he released his DVD; Ferry Corsten  Backstage. Corsten reveals his concept Once Upon a Night, a mix compilation that immediately hit number 1 on iTunes in the US right after its release, and the supporting world tour.

In 2010 Ferry Corsten has mixed the BBC Radio 1 Essential Mix and the album FC System F  Champions came out in February.

After the release of Vol.1, Ferry released Once Upon A Night Vol.2 on October 1, and his world tour started on September 17. He's one of the best DJs in the world, referring to the DJ Mag Top 100.

Ferry hosted a New Year's Eve event at the O2 Academy Brixton, London in 2011/2012 in which he delivered the midnight set and went on to perform back-to-back with other successful Trance DJ's/producers - Judge Jules, Sied Van Riel, Marcel Woods, to name a few.

In February 2012, Ferry Corsten released a full-length artist album, WKND (Flashover Recordings), comprising notable songs including: "Not Coming Down" ft Betsie Larkin; "Live Forever" ft Aruna; "Ain't No Stoppin'" ft Ben Hague; "Brute" with Armin van Buuren; "Check It Out" and "Feel It." The album was distributed by Ultra Records in the US.

Ferry Corsten stars in a series of professionally produced, original videos titled "WKNDR" (pronounced "weekender") where he speaks directly to viewers from various scenes around the world. The WKNDR series shows Corsten backstage and onstage at large nightclub and concert venues as well as festivals; the series also takes viewers into his private studio for a behind-the-scenes look at music production.

The 250th episode of Corsten's Countdown (April 11, 2012) was broadcast live, worldwide, for the duration of the unprecedented eight-hour show beamed out from the studios of SiriusXM Radio in New York City. The Corsten's Countdown show is aired in more than 40 countries and the CC250 broadcast became a Twitter trending topic three-times during that eight-hour broadcast during which time Ferry Corsten took live requests from around the world via a specially designed interactive website, Twitter and Facebook.

Ferry wrote a tune with Chicane and Christian Burns in July 2012 called One Thousand Suns, an emotive trance tune that has received airplay from the likes of Armin Van Buuren and a very positive fan reaction based on listener call-ins to his weekly Corsten's Countdown radio show.

On August 31, 2012, Ferry Corsten debuted his "FULL ON (Hosted By Ferry Corsten)" live show concept in North America at Roseland Ballroom in New York City for the official afterparty for the Electric Zoo EDM (electronic dance music) festival. The show was previously known as "FULL ON FERRY" and it involves Corsten DJing from inside a large 3D LED cube and utilizing custom-designed visuals. Before arriving in North America, the FULL ON show had toured (and continues to do so) extensively across the continents of Asia and Europe.

In November, 2012, Ferry Corsten released the third installment to his 'Once Upon A Night' compilation series on Premier (a label joint venture between Flashover Recordings and Black Hole Recordings). The physical release was a double-disc release.

On December 29, 2012, Corsten's Countdown broadcast another semi-annual 8-hour live and interactive radio broadcast originating from the studios of SiriusXM Radio in New York City. The broadcast is heard worldwide on partner radio stations in more than 40 countries and also on the interactive http://www.CorstensCountdown.com website.

After several spontaneous back to back performances in early 2013, Ferry Corsten and German producer Markus Schulz announced they will be producing and touring together as the new EDM group New World Punx. Their debut arena show was held at the Madison Square Garden during A State Of Trance 600 and debuted their first single Romper During the set. Ferry Corsten also premiered the single during the Corsten's Countdown show a few days later.

In November 2013, Ferry released the fourth version of his compilation series known as Once Upon A Night 4 through Premier which is a joint venture between Flashover Recordings & Black Hole Recordings.

This article uses material from the article Ferry Corsten from the free encyclopedia Wikipedia and it is licensed under the GNU Free Documentation License.

Build Me Up Buttercup Foundations
Update Required To play the media you will need to either update your browser to a recent version or update your Flash plugin.