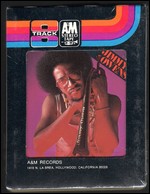 Jimmy Owens (born 1943) is a jazz trumpeter, composer, arranger, lecturer, and educator. He has played with Lionel Hampton, Charles Mingus, Hank Crawford, Dizzy Gillespie, Count Basie, Herbie Mann, among many others. Since 1969, he has led his own group, Jimmy Owens Plus.

Jimmy Owens was born on December 9, 1943, in New York City, New York. He is a renowned jazz trumpeter and, in addition, plays the flugelhorn. He is also a well-known composer, lecturer, arranger and music education consultant, harnessing more than 45 years of musical experience. Owens does not have an enormous amount of recordings as a leader; however, his popularity was instead nourished through session work with various groups and band leaders.[1] His encounter with music encompasses a vast range of intercontinental musical success including ballets, movie scores, serving as a band leader and even creating orchestral compositions.[2] He has performed with various jazz artists such as Max Roach, Duke Ellington, Charles Mingus, Kenny Barron, Count Basie, Benny Golson, Billy Taylor, Lionel Hampton, Hank Crawford and other well-known artists. All throughout his musical career, Owens demonstrated his understanding of the jazz concepts, but also illustrates a proficient comprehension of the blues style, and provided musically emotional atmospheres for ballads.[2]

Owens began playing the trumpet at the age of fourteen under the tutelage of Donald Byrd and later studied music composition with Henry Brant. At the age of fifteen, Owens had the opportunity of sitting in with Miles Davis band; however, he did not record with them. In the late 1960s, he was a member of Marshall Browns Newport Youth Band.[1] Owens graduated from the High School of Music and Art in New York City, and subsequently attended the University of Massachusetts where he obtained his master's degree in Education. In the 1960s, he was a member of the hybrid classical and rock band Ars Nova.[3] After Ars Nova ended, he was a member of the New York Jazz Sextet. Among the members of this group at various times were Sir Roland Hanna, Ron Carter, Billy Cobham, Benny Golson, Hubert Laws, and Tom McIntosh. In addition, he has led his own group, Jimmy Owens Plus, since the 1970s, touring and playing in festivals and concerts all over the world. His performances with his band have taken him to Asia, South and Central America, the Middle East and various parts of Europe. In 1969 he helped found Collective Black Artist, a non-profit jazz education and performing organization in 1969. Between 1969 and 1972, Owens was a sideman on The David Frost Show whose musical director was Dr. Billy Taylor. Sidemen in this group included Frank Wess, Seldon Powell, Barry Galbraith, and Bob Cranshaw. Stepping into adulthood, Owens had already established a good reputation for himself that led him to the opportunities such as touring France with Duke Ellington.

Jimmy Owens toured France again in 1971 with the Young Giants of Jazz, performed with radio orchestras in Germany and the Netherlands, and also played with Chuck Israels National Jazz Ensemble.[1] At the 1970 Newport Jazz Festival, Owens was one of the youngest trumpet players present to participate in a tribute that was played in the honor Louis Armstrong. That same year, Owens released his first album, No Escaping It (1970), on which he seamlessly demonstrated his musical edge while maintaining a warm tone, along with decisive notation. In 1972, he was chosen to play a trumpet tribute for past trumpeters, such as Dizzie Gillespie and Roy Eldridge, at the inaugural Ellington Fellowship Concert that was held at Yale University.[4] In the 1970s, Owens did a great deal of travelling and began doing yearly European Tours in Spain, France, Italy, Denmark, England, the Netherlands, and Sweden. During this time, he was shown a great amount of appreciation in orchestral and symphonic music through his guest appearances with the Southern University Symphony Orchestra, the Rochester Philharmonic Orchestra, the Symphony of the New World, and the Hannover Radio Philharmonic Orchestra. One of his performance highlights of the 1970s was the tour he took in the U.S. called, Western States Arts Foundation Tour. After his first album, he released three more albums titled, Jimmy Owens, Young Man on the Move and Headin Home; all of which were released the 1970s. In 1972, Owens began giving back to the community by becoming a member of the National Endowment for the Arts music panel up until 1976. This organization sought to aid in funding numerous organizations and individual artists.[5] From 1977 to 1981, he was a member of the music panel for the New York State Council on the Arts, which funded New York State cultural organizations.[5]

In the 1980s, Jimmy Owens demonstrated no lack in the passion that he held for music. He continued venturing overseas, and played in a variety festivals and concerts in different countries. He also performed concerts in the Middle East and Africa during his Tour of North Africa and the Middle East, U.S. State Department (1981). Jimmy Owens Plus also toured South American in their South American Tour (1983 and 1986) and also performed across Central America in their Tour of Caribbean, Central and South America (1989). Owens received several awards during the 1980s including the Survival of the Black Artist Award (1980) from Howard University, the International Success Award (1983) from the Marabu Club in Italy, and the "Manhattan Borough Presidents Award for Excellence in the Arts" (1986).[2] In 1989, Owens released an album called The Jazz Mobile Allstars, featuring Billy Taylor, Frank Wess, Victor Gaskin, Ted Dunbar and Bobby Thomas.

In 1990, the Jazz Musicians' Emergency Fund was founded to help individual musicians with medical, financial, and housing assistance after Jamil Nasser and Jimmy Owens presented this idea to the board. Both Nasser and Owens felt it was very important to help individual jazz musicians rather than organizations.[6] This program not only provided financial assistance, but it also offered counseling in career development as well as substance abuse. In that same year, Owens took a part-time position as an instructor at the New School Jazz and Contemporary Music Program, where he taught private lessons, the business aspects of the music industry and various ensemble classes.[5] In the 1990s, he attended quite a few jazz festivals in Austria, England and in the U.S., while serving as a guest soloist to a variety of bands performances in America and Europe. In 1996, Bob Crenshaw, Jamil Nasser, Benny Powell and Owens helped to revitalize the Jazz Advisory Committee at Local 802 in New York City. This particular commission advises Local 802 on the conflicts surrounding most jazz artists and seeks methods of resolution. Owens was also a member of the negotiating committee to secure health and pension benefits, along with schedule wage increases for the faculty at the New School.[5]

In the new millennium, Jimmy Owens remained moderately involved within programs and events that give back to numerous communities. He performed at a variety of events such as Giants of Jazz (200209) in New Jersey, the Cab Calloway Tribute (2005) in Japan, and the Dizzie Gillespie Tribute (200507) in New York City. He appeared at numerous festivals across the globe such as the Gratz Jazz Festival (2004) in Gratz, Austria, the World Music Festival (2005) in Bahia, Brazil, the Novokuznesk Jazz Festival (2005) in Siberia, several celebrations in Italy and the Jazz Town Jazz Club (2005) in Moscow, Russia. In 2007, he released an album called Peaceful Walking, which was recorded in Italy and contains original songs performed with a guitar-bass-drums trio.[5] In 2012, he released an album entitled Monk Project, which commemorates the life and musical innovation of jazz pianist Thelonious Monk, who died in 1982.

Owens is an active member of the jazz education community. He also sits on the board of the Jazz Foundation of America, which was founded in 1989. He is an innovative and highly skilled jazz artist whose eclecticism incorporates every aspect of jazz music and artistry. His accomplishments are momentous and noteworthy. Not only does his professional musicianship merit acknowledgement and respect, but his role of being an outspoken advocate concerning the welfare of musicians and the jazz culture of America reflects his generosity towards others. He is also reverenced composers whose works has been, and still are, performed nationally by the Rochester Philharmonic Orchestra and the Brooklyn Philharmonic Orchestra and various orchestras; also, his music can be heard internationally by the Metropole Orchestra in the Netherlands and the Hanover Radio Philharmonic Orchestra in Germany.[4] His career as a music educator has led him to positions conducting workshops, teaching seminars, giving lectures, and holding concerts at numerous institutes around the world. Throughout his life, he demonstrated an enormous appreciation for the jazz culture and music. In 1972 and on the night of the visiting fellows program in honor of Duke Ellington, Owens recalls the night as such:

I was center stage with some of the greatest men in the history of Jazz, and I wanted to perform something really meaningful. Since Jazz music has its roots in spirituals that later developed into the blues, I wanted to express my respect for these men by performing a spiritual and the blues. I looked around. I saw Eubie Blake, Benny Carter, Johnny Hodges, and Paul Robeson. I was standing in the midst of so many of the African American people who had contributed significantly to the history of American culture. What an incredible moment it was! It reconfirmed for me what I had learned in my travels as an artist. Jazz is the heartbeat of the world.[5]

Owens has always held a profound admiration for the art of jazz and displayed an immeasurable respect for the jazz pioneers that set the stage before him. To this day, he exhibits his adoration for music and attempts to share his understanding with everyone who listens. He contributes greatly to the next generation of musicians through his support in different groups and events across the U.S. He may not be famous for his virtuosic solos or unmatchable dexterity; however, he is reverenced as an advocate to musicians everywhere and is internationally appreciated as an accomplished artist that shared his knowledge and music with the world.

With All Star group

This article uses material from the article Jimmy Owens (musician) from the free encyclopedia Wikipedia and it is licensed under the GNU Free Documentation License.