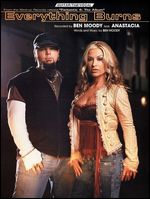 Benjamin Robert "Ben" Moody (born January 22, 1981) is an American musician, singer, songwriter, record producer, and actor. He is best known as co-founder, lead guitarist, and co-songwriter of rock band Evanescence from its inception in 1995 to his departure in October 2003. Since leaving Evanescence, Moody has collaborated with an array of performers vocally, instrumentally, and as a writer. He is currently a member of The Halo Method and We Are The Fallen.[1]

Moody was born in Little Rock, Arkansas. He met Amy Lee in 1994 while at a youth camp and the two eventually became friends.[2] They soon began playing music at local shops.[3] Within a few years, the pair began selling EPs at local shows, culminating in their discovery by Wind-up Records and the release of their major label debut album, Fallen, in 2003. Moody abruptly left the band in October 2003 during their European tour, citing "creative differences".[4]

Beginning in 2004, Moody began collaborating with a variety of artists, working in multiple disciplines. That year, he co-wrote the track "Nobody's Home" for Avril Lavigne's second album, Under My Skin, and wrote and recorded the track "The End Has Come" with Jason C. Miller and Jason "Gong" Jones for The Punisher soundtrack. He then wrote with David Hodges, Kelly Clarkson, and others for Clarkson's second album, Breakaway, working on the songs "Because of You" and "Addicted".

In early 2005, Moody played lead guitar for the song "Forever in Our Hearts", the 'song for tsunami relief' made exclusively for iTunes.[5] He collaborated with singer Anastacia on the song "Everything Burns", which is featured on her album Pieces of a Dream and the Fantastic Four soundtrack. Moody then assisted Lindsay Lohan on her album A Little More Personal (Raw) and worked with Bo Bice on the song "My World" (a cover from SR-71) for his debut album The Real Thing.

In April 2006, Moody began working on the debut album of Billings, Montana singer-songwriter Hana Pestle. He co-produced and co-wrote alongside Michael "Fish" Herring, and contributed vocals and instrumentals to the album.[6] He later produced the Godhead album The Shadow Line with Julian Beeston, and played a clown in their music video for the song "Push". He collaborated with David Hodges again on American Idol Chris Daughtry's debut album, Daughtry, for the song "What About Now".

In 2007, Moody worked with Céline Dion on her album Taking Chances,[6] and began work for his own solo album.

In December 2008, he released the Mutiny Bootleg E.P. and announced that his solo album would be released on March 3, 2009. This release would be delayed, however, as was hinted at in February 2009, when Moody's official website displayed the release as "available 2009" instead of the March 3 release date. On June 9, 2009, Moody's debut solo album, entitled All for This, was released digitally via Amazon.com, iTunes, and Amie Street through Moody's label, FNR Records. His second album, You Can't Regret What You Don't Remember, was released on November 11, 2011.

We Are the Fallen

Shortly after the release of All for This, it was announced that Moody had created and is also currently a member of a new rock band called We Are the Fallen. The members of the band include American Idol 7 finalist Carly Smithson as the lead singer, former Evanescence members Rocky Gray and John LeCompt, and Moody's friend Marty O'Brien.[1] We Are the Fallen made their first public appearance together for a press conference at SIR Studios in Los Angeles, CA, on June 22, 2009. Their debut album, Tear The World Down was released in May 2010 to generally positive reviews. The band toured for most of the year in support of the album, and filmed their first live DVD, Cirque Des Damnés, at the Avalon Theatre. The DVD was scheduled for release in late 2011.

In 2012 Moody teamed up with former Papa Roach drummer Dave Buckner and former Rockstar Supernova frontman Lukas Rossi to form a new project called The Halo Method. Before their debut show on the Shiprocked cruise in November 2012, former In This Moment bassist and studio engineer Josh Newell became their bassist. With Moody having gotten married in 2013 and having kids since then as well, very little has been heard about and from the band itself since 2015.

Aside from his music endeavours, Moody works with his television and film production company, Makeshift Films.[7] He has also done some film work, such as his cameo as a zombie in Resident Evil: Apocalypse.[8] He can also be seen in the 2007 release of the low budget, Lionsgate film, Dead and Gone.

We Are the Fallen

This article uses material from the article Ben Moody from the free encyclopedia Wikipedia and it is licensed under the GNU Free Documentation License.

Everything I Do (I Do It For You) Bryan Adams
Update Required To play the media you will need to either update your browser to a recent version or update your Flash plugin.