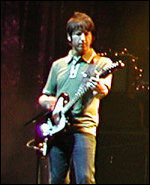 Colin Murray "Gem" Archer (born 7 December 1966) is an English musician, best known as a member of the English rock band Oasis and Beady Eye. He is also known for his work with Heavy Stereo. He joined Oasis as rhythm guitarist in November 1999, and handled lead guitarist for acoustics as well. He also contributed towards the writing of some of the band's songs. Oasis broke up in August 2009, but in November 2009, Liam Gallagher announced he was writing new material with Gem as well as other ex-Oasis members minus his brother Noel, under the name Beady Eye.[1]

The Edge and The Contenders

Archer began his musical career in a group called The Edge in the early 80s. They released two singles Take A Walk and Little Girl Blue.[2]

Once at Durham New College he recruited a lead singer in Simon Scott, an eclectic performer in the style of the New York Dolls.

Gem, Michael Chesters (aka Chess Chesters, and older brother of Eds Chesters of The Bluetones) and Jeff moved to London and formed The Contenders in early 1987, playing at the Bull & Gate in Kentish Town and other venues, often with friends 2 Lost Sons, who at that time were a three piece using Roland 808 and 909 drum machines for their live act. Gem's Contenders stage outfit was a black boiler suit with "THE CONTENDERS" written down the side in large white type. After The Contenders split, Chess joined the 2 Lost Sons as drummer. Along with Walker and ex Primal Scream drummer Gavin Skinner, Gem formed WHIRLPOOL in 1991 and signed to Food Records and EMI Publishing. Simon Scott was also involved on a live basis playing keyboards and back-up vocals. After gigging around the UK and recording for 18 months the group folded. This laid the foundations for Heavy Stereo, with Gem taking over the role of singer from Pete Downing's Buddy Holly lookalike brother Phil.

When Whirlpool split in the early 90s, Archer graduated to singer, principal songwriter and guitarist status with Contenders (The Contenders split in the late '80s, before Whirlpool formed) and then with Creation Records signing Heavy Stereo, a glam-rock sounding band that he formed with bassist Nez and guitarist Pete Downing of fellow Bull & Gate regulars 2 Lost Sons. Despite supporting Oasis at their historic Knebworth and Loch Lomond concerts in 1996, the only Heavy Stereo album, 1996's Déjà Voodoo did not enjoy much critical or commercial success. However, Heavy Stereo's next release did receive more attention through demos of new material, a critically acclaimed contribution to The Jam tribute album, Fire and Skill - Songs Of The Jam, and opening on a Paul Weller tour. Archer recalls "We'd got a Paul Weller tour and our new music was our best ever... I thought '99 really might be a good year for us." However, work on the record was put on hold when Archer's mother fell seriously ill.

Whilst at home in Durham, having returned to care for his mother, Archer lying in front of the fire heard a report on The Big Breakfast that Bonehead had left Oasis after a massive row with Noel Gallagher. He claims "I thought, Shit! They'll split now. I was a real fan, and I'm not just saying that. For me, Oasis had breathed life back into rock 'n' roll." He was unaware that Noel Gallagher who knew Archer from both their days on the Creation Records label had rung his home in London where it was Archer's son Joel's birthday party. Once Archer's mother had recovered, Gallagher invited him to Olympic Studios, where Oasis were mixing Standing on the Shoulder of Giants. "We went to the pub and I couldn't stand not knowing if I was a part of the band. After less than half a pint of Guinness I said, 'What does Liam say?' And Noel said, 'It's my fucking band. I'll have who I want.'" Archer claims the rest of Heavy Stereo were pleased for him to join Oasis.

Since Archer did not perform on the Giants album, he received no royalties and, for the first few performances, was paid a standard session wage, about £85 a gig, as the new Oasis rhythm guitarist. His first official duty was to appear on the "Go Let It Out" video on which he played lead guitar, as Andy Bell had yet to take over bass, so Noel played bass with Liam on vocals and played his first rhythm guitar set at a session for alternative radio in Philadelphia.

Though Archer was officially referred to as Oasis' rhythm guitarist, his role in Oasis was much more than that. In live setting he and Noel often switch between lead and rhythm guitar and both Noel and Liam Gallagher have praised Archer for his contributions in the studio. Archer also had a role as a songwriter. His first songwriting contribution after joining Oasis was "Hung in a Bad Place", which appeared on Oasis' 5th album Heathen Chemistry and was said to resemble Heavy Stereo. This song was picked up for use in a commercial for Victoria's Secret in the US. His role was expanded on Oasis' sixth studio album, Don't Believe the Truth, which features Archer's "A Bell Will Ring" and "Love Like a Bomb", the latter of which he co-wrote with singer Liam Gallagher. He also contributed the B-sides "Eyeball Tickler" and "The Quiet Ones" an acoustic song. He also wrote "To Be Where There's Life" on the 2008 album Dig Out Your Soul. Archer has said that he found it quite daunting to submit songs for consideration to the band because of Noel Gallagher's stature as a songwriter, whom he cites as one of his favourite songwriters. Archer, in rare occasions, contributed backing vocals to Oasis songs, such as on "The Meaning of Soul" (from Don't Believe the Truth), and on live performances of "Force Of Nature" (from Heathen Chemistry) and the band's cover of The Who's "My Generation".

Andy Bell highlighted Archer's significance to Oasis saying "Oasis has completely evolved. Noel's old mates have left, he's been divorced and really changed his own life around. He still has Liam but his relationship with Liam is different it's more tempestuous. He needs a less extreme mate and Gem's it. Gem chills Noel out. And that makes Oasis a more stable ship."

Although Noel Gallagher departed Oasis, Gem Archer and Noel Gallagher are still good friends and even teamed up for a charity concert at the Royal Albert Hall.

Noel Gallagher quit Oasis in August 2009, following an argument with his brother in Paris. Gallagher placed part of the blame for his decision to leave on Archer, and Andy Bell, for a lack of support saying "the lack of support and understanding from my... band mates has left me with no other option than to get me cape and seek pastures new.".[3] Soon afterwards the band announced they had split.[4] However, Archer, Bell, Liam Gallagher and Oasis live drummer Chris Sharrock resolved to work together on a new project under a new name, Beady Eye.[5][6] While Gallagher maintains a friendship with Archer, as well as Oasis drummer Chris Sharock, he claims that he has not spoken with his brother Liam or former Oasis bassist Andy Bell.

Outside of Oasis, Archer has collaborated with a few other artists, most notably Paul Weller. He has contributed acoustic guitar to the song 'One x One' on Weller's 2002 album Illumination and guitars and Mellotron to the song 'Echoes Round The Sun on Weller's 2008 album 22 Dreams. He participated in an acoustic tour of the USA with Weller when Steve Cradock of Ocean Colour Scene was unavailable, and provided guitar and backing vocals at the 2010 NME Awards when Weller performed a live set having received the 'Godlike Genius Award'.

Archer also had a role in making the Nine Inch Nails record With Teeth in middle-2004 before starting final sessions in October 2004 for the Oasis album Don't Believe the Truth. He also assisted Noel Gallagher in producing the first Proud Mary album, a band signed to Gallagher's Sour Mash record label.

On 1 August 2013, he was admitted to hospital with serious head trauma and a fractured skull after a freak accident at home, by falling down a flight of stairs. After several scans, to ensure that there was no long term effects, Beady Eye's (The band he is guitarist in, who include Liam Gallagher of Oasis) V-Festival act was cancelled, so that he could be kept under observation. He was later said to be in a stable condition.

This article uses material from the article Gem Archer from the free encyclopedia Wikipedia and it is licensed under the GNU Free Documentation License.

Firelight Moo Malika
Update Required To play the media you will need to either update your browser to a recent version or update your Flash plugin.