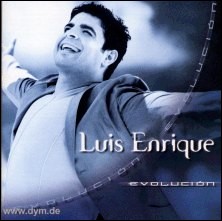 Luis Enrique Mejía López (born September 28, 1962) is a Nicaraguan singer and composer. He started his career in the late 1980s and achieved success in the 1990s earning the title "El Principe de la Salsa (The Prince of Salsa). He was one of the leading pioneers that led to the salsa romantica movement in the 1980s. Enrique has received two Grammy Award-nomination for "Best Tropical Latin Performance" for album Luces del Alma and his song Amiga. He performed and recorded with salsa romantica group Sensation 85, which also included La Palabra and Nestor Torres. In 2009, his album, Ciclos, was nominated for numerous Latin Grammy Awards, his biggest breakthrough in over a decade. The album won the Grammy Award for Best Tropical Latin Album.

This article uses material from the article Luis Enrique (singer) from the free encyclopedia Wikipedia and it is licensed under the GNU Free Documentation License.

Silly Love Songs Wings
Update Required To play the media you will need to either update your browser to a recent version or update your Flash plugin.