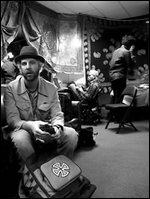 Thomas Martin Dumont (born January 11, 1968) is an American guitarist and producer. Dumont is a member of third wave ska band No Doubt, and during the band's hiatus, he began Invincible Overlord as a side project and produced Matt Costa's Songs We Sing.

Born in Los Angeles, California, the Dumont family lived in Irvine, California. Tom was the only adopted child in his family and has two siblings.[1] Dumont's father, who played the piano, gave his son a guitar at age twelve. Dumont practiced by strumming folk songs by the likes of James Taylor. Dumont was influenced by heavy metal bands such as Iron Maiden, Judas Priest and KISS.[2] He joined his older sister's heavy metal band Rising,[3] but left in 1988 for third wave ska band No Doubt. He has one sister named Gina and a brother named John.

Dumont studied music theory for five semesters at Orange Coast College.[2] When the band moved into a house on Beacon Avenue in Anaheim, he wrote a poem about being addicted to television. He took the poem to Eric Stefani, who put the poem to music and came up with the song "Trapped in a Box". The song was recorded for the band's self-titled debut album and was the album's only single.[4]

The band later self-released The Beacon Street Collection in March 1995. The same month, Dumont left his job as a file clerk at a mortgage company. He had "a good feeling" about having finished recording Tragic Kingdom and planned to fall back on promoting rock concerts if the album was not successful.[5] Tragic Kingdom became a commercial success, certified diamond in the United States[6] and selling sixteen million copies worldwide.[7] When Eric left the band Tom, along with bandmates Gwen Stefani and Tony Kanal, took leadership in writing and composing responsibilities.

After the Tragic Kingdom tour, Tom returned to his home in Long Beach, California and started surfing in 1997.[8] Dumont is a member of The Surfrider Foundation, an environmental organization to preserve coastal life. Since Eric Stefani left, Tom Dumont, Tony Kanal and Gwen Stefani became No Doubt's primary songwriters.

Reunion with No Doubt

With Stefani promoting her second solo album, No Doubt began initial work on a new album without her[10] and planned to complete it after Stefani's tour was finished.[11] In March 2008, the band started making posts concerning the progression of the album on their official fan forum. Stefani made a post on March 28, 2008 stating that songwriting had commenced but was slow on her end because she was, at the time, pregnant with her second child.[12]

Manager Jim Guerinot said the yet-untitled album is being produced by Mark "Spike" Stent, who helped produce and mix Rock Steady. Between Stefani's pregnancy and recording, No Doubt did not tour in 2008, but Guerinot promised, they plan to hit the road hard in 2009 for their first full-fledged band tour in nearly five years.[13]

No Doubt announced on their official website that they will tour in the summer of 2009 with Paramore, The Sounds, Janelle Monáe, Bedouin Soundclash, Katy Perry, and Panic! at the Disco. while finishing their upcoming album, which was set to be released in 2010 but has been delayed.[14][15] Tickets for the tour went on sale March 7, 2009.[16] As a special promotion for the tour, the band is giving away their entire music catalog free as a digital download with purchase of top tier seating.[17]

In 2009, No Doubt made an appearance on the television series Gossip Girl, playing a fictional band called "Snowed Out" in the episode "Valley Girls".[18] They performed their cover version of the Adam and the Ants song "Stand and Deliver".[19]

According to his No Doubt band mates, when Dumont drinks enough alcohol he becomes an alter-ego doppelganger named "The Douche".[21]

Dumont is an avid traveler, spending a good part of his free time on the road, he has been spotted in remote areas of the world with his wife and kids.

This article uses material from the article Tom Dumont from the free encyclopedia Wikipedia and it is licensed under the GNU Free Documentation License.

Bed Of Roses Bon Jovi
Update Required To play the media you will need to either update your browser to a recent version or update your Flash plugin.