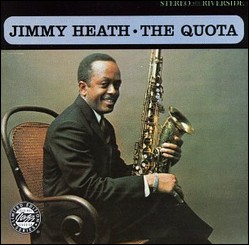 Heath originally played alto saxophone, but, after the influence of Charlie Parker on his work for Howard McGhee and Dizzy Gillespie in the late 1940s, he earned the nickname "Little Bird" (Parker's nickname was "Bird") and he switched to tenor saxophone.[1]

During World War II, Heath was rejected for the draft for being under the weight limit. From late 1945 through most of 1946 he performed with the Nat Towles band. In 1946 he formed his own band, which was a fixture on the Philly jazz scene until 1949. John Coltrane was one of four saxophonists in this band, which played gigs with Charlie Parker and also at the Apollo Theater in Harlem. Although Heath recalls that the band recorded a few demos on acetate, it never released any recordings, and its arrangements were lost at a Chicago train station. The band dissolved in 1949 so that Heath could join Dizzy Gillespie's band.[2]

Heath composed most of the 1956 Chet Baker and Art Pepper album Playboys.[1]

He briefly joined Miles Davis's group in 1959, replacing Coltrane, and also worked with Kenny Dorham and Gil Evans.[1][3] Heath recorded extensively as leader and sideman. During the 1960s, he frequently worked with Milt Jackson and Art Farmer.[1]

In 1975, he and his brothers formed the Heath Brothers, also featuring pianist Stanley Cowell.[1]

In the 1980s, Heath joined the faculty of the Aaron Copland School of Music at Queens College in the City University of New York. With the rank of Professor, he led the creation of the Jazz Program at Queens College and attracted prominent musicians such as Donald Byrd to the campus. He also served on the Board of the Louis Armstrong Archives on campus, and the restoration and management of the Louis and Lucille Armstrong Residence in Corona, Queens, near his own home.[5] In addition to teaching at Queens College for over twenty years, he has also taught at Jazzmobile.[3] Heath was a recipient of the 2003 NEA Jazz Masters Award.[3] In 2004, he was awarded an honorary Doctorate in Human Letters.[6]

Heath is the father of R&B songwriter/musician James Mtume.[7]

With the Heath Brothers

This article uses material from the article Jimmy Heath from the free encyclopedia Wikipedia and it is licensed under the GNU Free Documentation License.