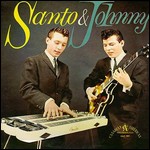 They are best known for their instrumental "Sleep Walk", which became a regional hit and eventually reached the top of the Billboard pop chart when it was released nationally in 1959.[2]

At present, Santo is semi-retired and Johnny currently tours and records new material with his own band. Johnny is also the president of Aniraf, Inc., an international record company based in New York.[3]

Santo and Johnny Farina were born in Brooklyn, New York; Santo on October 24, 1937 and Johnny on April 30, 1941.[3][4] Their father was drafted into the Army while they were children and was stationed for some time in Oklahoma. After hearing a steel guitar on the radio, he wrote to his wife, "I'd like the boys to learn to play this instrument".[5]

Upon returning from World War II, the boys' father found a music teacher who gave the boys steel guitar lessons. When Santo was a teenager, he was able to get a local music store to modify an acoustic guitar, allowing him to play it like a steel guitar.[4]

Within two years, Santo was performing in amateur shows on a new Gibson six-string steel guitar and had started receiving lessons from a steel guitar teacher who had studied in Hawaii. By the age of fourteen, Santo was composing songs, and formed an instrumental trio with a guitarist and drummer. This trio appeared at local dances and parties, performing both original compositions and some Hawaiian standards. With money Santo made from these performances, he bought a Fender steel guitar, one with three necks, each with eight strings. This allowed him to experiment even further, and he tried different tunings until he found ones that appealed to him.

When Johnny reached the age of twelve, he began to play accompaniment to Santo on a standard electric guitar. The brothers soon formed a duo and became rather popular in school, eventually performing at events in the New York boroughs. They recorded a demo which they circulated to local New York record companies.

In 1958, Mike Dee & The Mello Tones (Santo Farina, steel guitar; Johnny Farina, guitar and their uncle Mike Dee, drums) recorded a self-penned instrumental which they called "Deep Sleep". Loosely inspired by the song "Softly, As In The Morning Sunrise" (Sigmund Romberg, 1929), it had the same chord progression but a simpler melody line.

"Deep Sleep" became "Sleep Walk" and in September 1959 it topped the American charts.

The brothers eventually came to the attention of a music publishing company and signed a song writer's contract and eventually a contract with Canadian-American Records. Their first release, "Sleep Walk", was composed by the two brothers. (The original single credits three Farinas, including an "A. Farina" for the composition. It's sometimes reported that their mother or sister helped, but this is apparently false.[6]) It was recorded at Trinity Records in Manhattan. "Sleep Walk" entered Billboard's 'Top 40' on August 17, 1959. It rose to the No. 1 position for two weeks in September (the 21st and the 28th)[2] and remained in the 'Top 40' list until November 9. It was the last instrumental to hit #1 in the 1950s and earned Santo & Johnny a gold record.[5] The follow-up song "Tear Drop" was also a hit, though their LP Santo & Johnny was less successful in the United States.

After touring Europe, Mexico, and Australia, Santo & Johnny signed to an Italian record label and had several hits in Europe that included "Sleep Walk", "Love Story", "Maria Elena", "Ebb Tide", "Love is Blue", "Enchanted Sea", and others. In 1964, they released an album of The Beatles covers; "And I Love Her" hit #1 in Mexico and held the spot for 21 weeks. In 1973, Santo & Johnny recorded the theme to the movie The Godfather, which went to #1 in Italy and stayed at that spot for 21 weeks. They received a gold record in Italy and were inducted into the Italian Music Hall of Fame.

"Sleep Walk" continues to be popular due to consistent radio airplay as well as its usage in commercials, television shows, and movies. One of the first covers was by Betsy Brye[7] (stage name of Bette Anne Steele) in 1959. While Santo & Johnny wrote lyrics for "Sleep Walk", they never recorded a lyrical version, but Betsy Brye's version included these lyrics. It has been also covered by The Shadows, Stray Cats, The Ventures, Jake Shimabukuro, Amos Garrett, Kenny Vance and the Planotones, Larry Carlton,[8] Deftones, Chet Atkins,[9] Danny Gatton, Leo Kottke, The Sir Douglas Quintet, Jonathan Richman,[10] Larry Berwald, and Joe Satriani.[11] Indie group Modest Mouse also covered the song with lyrics and entitled their version "Sleepwalkin'". A version by Brian Setzer received a Grammy Award for Best Pop Instrumental Performance of 1998.[12] "Sleep Walk" was used throughout the 1992 Stephen King film, Sleepwalkers. "Sleep Walk" also plays a role in the 1995 Terry Gilliam sci-fi film, 12 Monkeys. It is also played in the end scene of "La Bamba" after protagonist Ritchie Valens dies. The song can also be heard in "Eddie and the Cruisers" as well as in the film "Hearts in Atlantis" starring Anthony Hopkins. Tim Kring's 'Heroes' which aired on NBC also featured "Sleep Walk" playing on a record in a diner, from the episode '1961'.

This article uses material from the article Santo & Johnny from the free encyclopedia Wikipedia and it is licensed under the GNU Free Documentation License.

It's Raining Paul Schmidhauser
Update Required To play the media you will need to either update your browser to a recent version or update your Flash plugin.