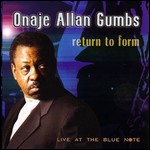 Onaje was born in Harlem, grew up in St. Albans, Queens, and started playing piano at age 7. Henry Mancini was one of his earliest and greatest influences from watching the TV shows "Peter Gunn" and "Mr Lucky" at age 8. Later, he studied at the Music and Art High School in Manhattan and was introduced by a classmate, Carl "Skip" Kirkland, to his father Leroy Kirkland, who had played with the Erskine Hawkins band, and who would come to mentor Onaje. He went on to study classical piano, composition, arranging and graduated with a degree in Education at the State University of New York at Fredonia.

In 1971, Leroy Kirkland introduced Onaje to the Detroit guitarist Kenny Burrell, to whom Onaje gave a demo tape. The following day, Onaje received a call to play with Burrell at Baker's Keyboard Lounge in Detroit. This work led to further performances with major jazz musicians such as bassist Larry Ridley as well as The Thad Jones/ Mel Lewis Orchestra. During those early 1970s, Onaje replaced Nat Adderley, Jr. in a contemporary jazz ensemble called Natural Essence. At that time in the course of two years, some of the personnel of this group included drummer Buddy Williams, bassist Alex Blake, trombonist Earl McIntyre and on percussion, T. S. Monk.

Onaje contributed to the albums of Norman Connors, Dark of Light, Love from the Sun, Saturday Night Special, You Are My Starship, Invitation, Mr C and Eternity. Onaje's sideman work soon included stints with Buster Williams, Cecil McBee, and Betty Carter. Toward the late 1970s, Onaje spent two years working in Woody Shaw's band as pianist, arranger, and occasional composer, including the albums Rosewood, Stepping Stones and Woody III. During this time, the group won the Down Beat Reader's Poll for Best Jazz Group and for Best Jazz Album in 1978 for Rosewood. On the Norman Connors You Are My Starship album, Onaje arranged and played keyboards on the tune "Betcha By Golly Wow". His most recent sideman role was Avery Sharpe's 2012 album Sojourner Truth: Ain't I a Woman.

During Onaje's time with Nat Adderley (1976), the producer Nils Winter of SteepleChase records, heard Onaje's improvisations, and invited the pianist to record a solo piano project. Entitled Onaje, the album features standards such as "Giant Steps", as well as some of Onaje's original compositions. His interest in R&B is especially prominent in two of his solo recordings, That Special Part of Me (1988), and Dare to Dream (1991). In 2003, Onaje released a live album through Half Note records entitled Return to Form, recorded at the Blue Note Jazz Club in Manhattan. He then released in 2004 a critically acclaimed project through his own label, Ejano, entitled Remember Their Innocence. In 2006, Onaje recorded an album for 18th and Vine records, Sack Full of Dreams. Film and stage actor Obba Babatundé appeared as guest vocalist on the title track.

On January 24, 2010, Onaje suffered a stroke. Miraculously, he stayed in the hospital for only two days. By December of that same year, an album was released in Japan entitled Just Like Yesterday. On this CD Onaje was accompanied by Omar Hakim, Victor Bailey, Marcus McLaurine, William S. Patterson and Chuggy Carter. Any visible signs of the stroke had since vanished. In February 2015, Onaje suffered another medical setback. Although he was hospitalized for two weeks, he recovered and was able to return to work doing what he does best, composing, arranging and playing piano.

In 1986 Onaje received the Min-on Art Award from the Buddhist organization, Soka Gakkai International "in recognition of his great contribution to the promotion and development of a new musical movement for people with the aim of the creation of Peace". Panasonic chose his song, "Dare To Dream", with lyrics by Charles Allen, as the theme for their tenth anniversary celebration of Kid Witness News. Gumbs composed, arranged and performed the original score for the Showtime film, Override, directed by actor and producer Danny Glover. In 2006, Onaje was nominated for an NAACP Image Award in the Outstanding Jazz Artist category for his independent project, Remember Their Innocence.

This article uses material from the article Onaje Allan Gumbs from the free encyclopedia Wikipedia and it is licensed under the GNU Free Documentation License.

Some Days Reto Burrell
Update Required To play the media you will need to either update your browser to a recent version or update your Flash plugin.