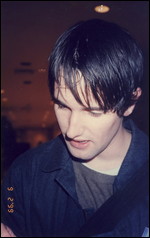 Timothy James Arthur Wheeler[1] (born 4 January 1977), known as Tim Wheeler, is a Northern Irish guitarist, songwriter, and vocalist for the rock band Ash. He formed the band with Mark Hamilton and they were originally called Vietnam. Wheeler can be seen playing a Korina Gibson Flying V in almost all of Ash's music videos. He has written nearly all of their notable pieces such as "Oh Yeah", "Shining Light", "Kung Fu", and "Goldfinger".

Wheeler was born in Downpatrick, Northern Ireland.[2] He attended Down High School with his fellow band members Mark Hamilton and Rick McMurray.

He won the Ivor Novello Award for Best Contemporary Pop Song in 2001 for Shining Light.[3]

As part of Channel 4's program The JD Set, Wheeler worked with Emmy The Great, The Crookes, And So I Watch You From Afar and Ma Mentor, joining each band in covering songs by Pixies, and then performing at London's XOYO on 24 March 2011.[6]

Tim has collaborated frequently in recent years with Emma-Lee Moss, AKA Emmy The Great, the duo have performed Ash track "Tracers" on several occasions, and in 2011 Tim, Emma & Euan Hinshelwood covered Robert Manning's song "Washington Parks", the cover was released as part of a collection of covers to raise awareness of Multiple Sclerosis.[7][8] The pair acoustically performed a set of Ash & Emmy The Great songs, as well as some covers at Willowstone Festival on 1 July 2011.[9]

In November 2011 the pair released a Christmas album, entitled This Is Christmas (Infectious, 2011).[10]

Wheeler is perhaps most recognised for using a Gibson Flying V, which he has frequently used live since 1998 onwards - his Flying V has a 50's Zebra Coil PAF pickup, and has also been modified in the past for pyrotechnics - the Flaming Flying V acts as a flamethrower, firing from between the V part of the guitar body.[11][12] Prior to this Wheeler mainly used various Gibson Les Paul models. Wheeler also plays a Gibson SG and Gretsch Silver Jet, the Sliver Jet was frequently used both live and in studio since Ash's album Twilight of the Innocents. For heavier tracks such as "The Dead Disciples" Tim uses a Fender Telecaster. In 2011 Wheeler purchased a Gretsch 1966 Sal Fabrio in 2011, for studio and rehearsals.

Tim predominately uses a Mesa/Boogie Road King Series II and a Marshall amplifier, along with various effects pedals, including; Electro-Harmonix Micro Synthesizer, a Dunlop Crybaby Wah pedal, a Nocto Loco octave pedal which replaced a Korg synthesiser in his effects rack. Tim altered much of his setup in 2011 by using a Line 6 M9 stompbox modular.[12][13]

The Flying V guitar that Wheeler set on fire on the Ash Meltdown tour is now on display at the Oh Yeah (music centre) in Belfast.[14] The Oh Yeah Centre is dedicated to the music of Northern Ireland and was named after the song Oh Yeah by Ash.[15]

With the release of the bands fifth studio record Twilight of the Innocents, in 2007, Wheeler spoke of how if the group hadn't toured so heavily they would have been more prolific, that: "It would have been cool to have twice as many songs by now. I definitely could have done it, but if I go on tour I have to stop writing. Writing needs to be a relaxing process and you need peace and quiet and the right stuff around you. Whenever we take a break I could write a song every day, pretty much."[16]

Wheeler is an Arsenal F.C. fan; this came after living in Highbury for nine years.[17]

This article uses material from the article Tim Wheeler from the free encyclopedia Wikipedia and it is licensed under the GNU Free Documentation License.

Running Wild Adam's Wedding
Update Required To play the media you will need to either update your browser to a recent version or update your Flash plugin.