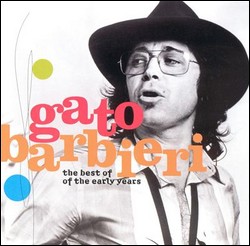 Born to a family of musicians, Barbieri began playing music after hearing Charlie Parker's "Now's the Time". He played the clarinet and later the alto saxophone while performing with the Argentinean pianist Lalo Schifrin in the late 1950s. By the early 1960s, while playing in Rome, he also worked with the trumpeter Don Cherry. By now influenced by John Coltrane's late recordings, as well as those from other free jazz saxophonists such as Albert Ayler and Pharoah Sanders, he began to develop the warm and gritty tone with which he is associated. In the late 1960s, he was fusing music from South America into his playing and contributed to multi-artist projects like Charlie Haden's Liberation Music Orchestra and Carla Bley's Escalator Over The Hill. His score for Bernardo Bertolucci's 1972 film Last Tango in Paris earned him a Grammy Award and led to a record deal with Impulse! Records.[1]

By the mid-1970s, he was recording for A&M Records and moved his music towards soul-jazz and jazz-pop. Caliente! (1976) included his best known song, a rendition of Carlos Santana's "Europa". That and the follow-up album, Ruby Ruby (1977) were both produced by fellow musician and label co-founder, Herb Alpert.

Although he continued to record and perform well into the 1980s, including composing the scores to films such as Firepower (1979) and Strangers Kiss (1983), the death of his wife Michelle led him to withdraw from the public arena. He returned to recording and performing in the late 1990s, composing original scores at the behest of friend Bahman Maghsoudlou for Amir Naderi's Manhattan by Numbers (1991) and Daryush Shokof's Seven Servants (1996). The album Qué Pasa (1997) moved more into the style of smooth jazz.

Barbieri was the inspiration for the character Zoot in the fictional Muppet band Dr. Teeth and The Electric Mayhem.[2]

With Carla Bley and Paul Haines

With the Jazz Composer's Orchestra

This article uses material from the article Gato Barbieri from the free encyclopedia Wikipedia and it is licensed under the GNU Free Documentation License.

Las Vegas Sydney Kapstadt Halunke
Update Required To play the media you will need to either update your browser to a recent version or update your Flash plugin.