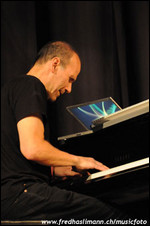 Russell Keith Ferrante (born 1955[1]) is an American jazz pianist who is a founding member of the group Yellowjackets.

During his early career, Ferrante performed with American blues singer Jimmy Witherspoon and guitarist Robben Ford. He also toured with Joni Mitchell. The group Yellowjackets also includes Los Angeles based saxophonist Bob Mintzer. Yellowjackets write and perform their own music at jazz venues in America, Europe and Asia. They have been nominated for Grammy awards and have won twice in their category. Ferrante is married with one daughter.

Ferrante’s first exposure to music came from his church, where his father was the choir director. He began piano lessons at 9. Beside his early interest in the piano, Ferrante also tried other instruments, including drums, and has played percussion on some recording sessions.

Ferrante took piano lessons from Anne Penner in San Jose, CA from age 9-16. He became interested in jazz and pop in his teens and studied on his own. In high school he began performing with various R&B and jazz groups in the San Francisco Bay Area. In 1973 he met guitarist Robben Ford and toured the U.S. and Europe as part of Jimmy Witherspoon's band. Ferrante says of this time:

Much to my parent's displeasure, my gig with Jimmy Witherspoon necessitated my dropping out of college. I like to say though that navigating the musical and non-musical hazards of the road with "Spoon" was an education I could never have gotten in college.

In 1977 Ferrante moved to Los Angeles in order to continue working with Robben Ford. He was soon recording and touring with Ford, Joe Farrell, Tom Scott, and Joni Mitchell among others. During this period Ferrante, Ford and Jimmy Haslip co-founded the jazz group the Yellowjackets.[2] Ferrante also began working as a freelance writer, arranger and producer for numerous recordings including those by Bobby McFerrin and Al Jarreau.

In 1977, Ford assembled a group of veteran session musicians to record his album The Inside Story. The trio of musicians, which included keyboardist Russell Ferrante, bassist Jimmy Haslip and drummer Ricky Lawson, soon discovered a musical chemistry that led to the formation of Yellowjackets. After the album's release, Ford's record label requested a more pop and vocal oriented follow-up album. Preferring instrumental compositions, this same group was eventually accepted by Warner Brothers as Yellowjackets.

Prior to the landmark Four Corners album, Ricky Lawson departed to tour with Lionel Richie (and later, Whitney Houston) and was replaced by William Kennedy. Politics, the follow-up to Four Corners, returned to more acoustic textures. Marc Russo's final recording with the Yellowjackets was The Spin, recorded in Oslo, Norway. Greenhouse followed Russo's departure and saw the trio featuring big band arranger and saxophonist Bob Mintzer on some cuts and string accompaniments on others. Bob Mintzer eventually joined Yellowjackets.

With 1995's Dreamland, Yellowjackets returned to their first record label, Warner Brothers. In early 1999, William Kennedy departed Yellowjackets and Peter Erskine joined the group for remainder of the year. Unfortunately, Erskine's schedule conflicted with the band's; he left without recording an album with the group. In early 2000, Yellowjackets were again a trio, with Ferrante, Haislip and Mintzer using different drummers throughout the year. Marcus Baylor and Terri Lyne Carrington were among those joining the trio. Their Blue Hats release derives from this era as does Club Nocturne - a crossover album collaboration with guest vocalists Kurt Elling, Jonathan Butler, Brenda Russell and Gino Vannelli.

Ferrante has taught and conducted dozens of clinics at colleges and private music schools throughout the United States, Japan and Europe. Included are those at the Berklee School of Music (who offer a course analyzing Yellowjackets music) and the University of Southern California Thornton School of Music, where he is an adjunct professor.[1] He also does open counseling and live playing workshops at Musicians Institute. Keyboardist Derek Sherinian studied privately with Ferrante in 1985.

This article uses material from the article Russell Ferrante from the free encyclopedia Wikipedia and it is licensed under the GNU Free Documentation License.

Each Time You Break My Heart Nick Kamen
Update Required To play the media you will need to either update your browser to a recent version or update your Flash plugin.