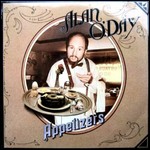 Alan Earle O'Day (October 3, 1940 May 17, 2013) was an American singer-songwriter, best known for writing and singing "Undercover Angel," a million-selling Gold-certified American #1 hit in 1977.[1] He also wrote songs for several other notable performers, such as 1974's Helen Reddy #1 hit "Angie Baby" and the Righteous Brothers' #3 Gold hit "Rock And Roll Heaven".[2] In the 1980s he moved from pop music to television, co-writing over 100 songs for the Saturday morning Muppet Babies series, and in the 1990s he wrote and performed music on the National Geographic series Really Wild Animals.

O'Day was born in Hollywood, California, the only child of Earle and Jeannette O'Day, who both worked at the Pasadena Star-News. Earle took newspaper photos and did publicity for the Palm Springs Chamber of Commerce. Jeannette wrote for the Star News, as well as being a schoolteacher in Thermal, California and other schools in the Coachella Valley.

O'Day stated that he remembered creating melodies on a xylophone at the age of six. By the fifth grade, his favorite artist was Spike Jones, and he was serenading his class on the ukulele. At Coachella Valley Union High School, after participating in one band called "The Imperials," he started his own rock'n'roll band, "The Shoves," with heavy influences from Jerry Lee Lewis, Little Richard, Elvis Presley, and Fats Domino. A third band, "The Renés" played Latin and Mexican standards mixed with rock and roll tunes and gave him the opportunity to write his own songs.

In 1961, he found work via a friend from high school, Arch Hall, Jr., whose father, Arch Hall, Sr., was an independent movie producer. The senior Hall wrote and produced films that starred the junior Hall, and O'Day helped out with the sound, in 1962, acting as music editor on the film Eegah and musical director on Wild Guitar, sound recorder on 1963's The Sadist, and sound mixer on the 1964 What's Up Front!. The work led to Arch Jr. and O'Day putting together a four-piece band (called "The Archers") and playing in clubs on the Sunset Strip such as Whiskey A Go Go and Pandora's Box.

Around 1965, O'Day was in the band "Alan & Bob & Denny," a show group which did pop songs and some comedy. They played nightclubs in the Pasadena & Hollywood area, and were on The Ed Sullivan Show on November 14, 1965, as the backup band for singer/actress/comedienne Virginia O'Brien.

In 1969, he signed with E. H. Morris Music, followed by Warner Brothers Music in 1971, writing "The Drum," which became a hit single for Bobby Sherman. In 1974, three more of his songs did well: "Train of Thought," recorded by Cher, "Rock And Roll Heaven," recorded by the Righteous Brothers, and "Angie Baby," recorded by Helen Reddy.

"Angie Baby" hit #1 at the end of December 1974 and became one of Reddy's biggest-selling singles. In a 2006 article, O'Day said the song took three months to write; originally, it was loosely based on the character in the Beatles "Lady Madonna". In order to make the character ("Angie") more interesting, he based her on a neighbor girl he had known who seemed "socially retarded". O'Day also thought of his own childhood; an only child who was often ill, many of his days were spent in bed with a radio to keep him company. O'Day showed the unfinished song to his therapist, who pointed out that the character's reactions were not those of a retarded person; O'Day then switched Angie from mentally "slow" to "crazy." This expanded to her living in a dream world of lovers, inspired by the songs on her radio. When an evil-minded neighbor tries to enter her room to take advantage of the girl, he is instead drawn into her reality, literally shrinking him down into her radio, "never to be found".

O'Day released his first solo album, Caress Me Pretty Music in 1973. The album was not a major commercial success and he temporarily put his recording career on hiatus.

In 1977, Warner Bros. Records formed a label for their composers who also performed. O'Day was the first artist signed, and the first release was "Undercover Angel." The song, which he described as a "nocturnal novelette," was in February 1977. Within a few months it had become #1 in the country, and has sold approximately two million copies. It was also a hit in Australia, reaching #9 on the Australian Singles Chart. ("Undercover Angel" also landed O'Day in an exclusive club as one of only a handful of writers/performers to pen a #1 hit for themselves and a #1 for another artist.)

A follow-up single, "Started Out Dancing, Ended Up Making Love" stalled at #73, marking O'Day's second and last appearance on the US charts. Three years later, in March 1980, a song called "Skinny Girls" reached #11 on the Australian Singles Chart. In 1981, O'Day co-wrote "Your Eyes" with singer-songwriter Tatsuro Yamashita, which became a hit in Japan.

O'Day left Warner Brothers in 1982 to write and self-publish. In 1983, he was invited to Tokyo to co-write six more songs with Yamashita for his album Big Wave. The collaboration yielded a Gold Disc Award in Japan.

In 1983, O'Day met San Francisco's singer-songwriter Janis Liebhart, with whom he co-wrote a children's song for a new Saturday morning animated TV show, Jim Henson's Muppet Babies. Within eight years they had written almost 100 songs for the program, which won an Emmy Award, and has since been syndicated internationally.

The collaboration continued after Muppet Babies, as O'Day and Liebhart co-wrote for other kid-focused projects, including National Geographic's Really Wild Animals, a series of videos which they helped produce and on which they also sang. They also worked on some children's products for Alaska Video.

O'Day lived in Nashville, to write and perform, and was also a musical and creative consultant. In 2012 Alan wrote and sang the title tune for the film, "You Don't Say."

This article uses material from the article Alan O'Day from the free encyclopedia Wikipedia and it is licensed under the GNU Free Documentation License.

Good Tradition Tanita Tikaram
Update Required To play the media you will need to either update your browser to a recent version or update your Flash plugin.