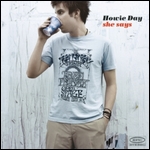 Howard Kern "Howie" Day (born January 15, 1981) is an American singer-songwriter. Beginning his career as a solo artist in the late 1990s, Day became known for his extensive touring and in-concert use of samplers and effects pedals in order to accompany himself.[1] He self-financed and self-released his first album, Australia, in 2000.

Day eventually signed a recording contract with major label Epic Records- in 2002 and has since re-released his debut as well as producing a follow-up, Stop All The World Now. Despite initially sluggish sales, Stop All The World Now was certified gold in early 2005 [2] and has produced a number of singles, including the hits "She Says" and "Collide", Day's most successful to date.[3] “Collide” later became Epic Records’ first platinum single, eventually selling 1.5 million downloads.

After a five-year tour before the release of Stop All The World Now followed by a three-year tour, Day took some time off and focused on writing music. Day released his Be There EP in May 2009 followed by Sound The Alarm, released on September 8, 2009. In December 2014, Day created a PledgeMusic campaign to fund a new album, Lanterns, which was released to pledgers on April 16, 2015.[4] The album was released on iTunes April 28, 2015. Several songs on the album feature Aimee Mann on backing vocals.

Born in Bangor, Maine and raised in Brewer, Howie Day began to play music at age five when his mother bought a piano at an auction.[4] When Day's mother noticed that her son was able to play by ear tunes of television advertising jingles, she enrolled him in piano lessons, which he would continue for six years.He attended John Bapst High School.

At around age 13, Day's interest drifted toward rock music and the electric guitar. His father bought him a Fender Stratocaster and enrolled him in basic vocal training. His parents owned and ran a popular local restaurant, which gave Day a public arena in which to start performing, playing every Friday night for patrons. Day made his first stage appearance in August 1996 at Bangor restaurant Captain Nick's.[5] Day played in a local band called Route 66 throughout 1997 and made sporadic solo appearances in local venues until booking agent Shawn Radley discovered him the following year while Day was supporting Ziggy Marley at the University of Maine.[6] Radley became Day's manager in June 1998, and he began touring more extensively, leading him to miss 45 days of school and to almost fail his senior year.[7]

At some point in 1998, Day recorded his first demo EP, which contained covers of songs by Dave Matthews Band, Barenaked Ladies, and Goo Goo Dolls alongside the originals "Buzzing" and "Lick My Lips." This EP was followed later in 1998 by another demo consisting wholly of Day's originals.

On the strength of these performances and demos, Radley secured Day a showcase at the annual National Association for Campus Activities Convention, where he played for 1,500 college talent buyers.[8] Having received around four months of bookings at colleges around the United States, Day decided to defer attending college in favor of his burgeoning music career.

Day recorded a cover of The Beatles' "Help!" for the soundtrack to the 2001 film I Am Sam.

Day's first full-length album, Australia, was self-financed and independently released. It was named "Best Debut Album" at the 2001 Boston Music Awards. Fans consider it to be one of his best and most authentic works, with follow-up albums Stop All The World Now and Sound the Alarm as having a more commercial, polished sound and feel.

After the EP's release, Day relocated to London, England to record Australia's follow up, which was provisionally titled From a Northern Sky.[1] The album, which would eventually become Stop All The World Now, was recorded in London's famous Olympic Studios with Martin "Youth" Glover, the bassist for British band Killing Joke, whose previous production credits included The Verve's Urban Hymns, one of Day's favorite albums.

While certain tracks on Australia had featured session musicians, Stop All The World Now saw Day joined for the first time by a permanent backing band, consisting of multi-instrumentalist Les Hall, drummer Laurie Jenkins and ex-Verve bassist Simon Jones. In addition, the majority of the album's songs were co-written with either Better than Ezra frontman Kevin Griffin or Jump Little Children's Jay Clifford.

A full band tour to promote Stop All the World Now began on September 27, 2003. Due to other commitments, Simon Jones was unable to tour with the group and was replaced by Jeremy Curtis. The album was released one week and three days later on October 7 to tepid critical reactions. Rolling Stone's Pat Blashill referred to Stop as "not bad" but "indistinct,"[9] but Popmatters' Devon Powers noted that though Australia had been an album one falls for passionately, "Stop All the World Now is an album you have a crush on, not one you fall deeply, complexly, and foolishly in love with. And crushes have a way of disappearing suddenly, without a trace."[10]

Sales of Stop were initially sluggish, but slowly began to rise beginning in late 2004 with the single release of ballad "Collide", which became a popular radio hit and was featured on TV shows such as Cold Case, Scrubs, Grey's Anatomy, Bones, and One Tree Hill as well as soundtracking a promotional trailer for the 2005 film adaptation of Jane Austen's Pride and Prejudice. Stop was finally certified gold in early 2005. Fan favourite "She Says", which was first released on 1998's White EP, was released as a follow-up to "Collide."

Boosted by the slow burning success of Stop All the World Now, Epic released the Live From... EP on December 6, 2005. The 7-track EP contains live renditions of songs from Australia and Stop All the World Now as well as a cover of Crowded House's "Don't Dream It's Over". The EP has not been widely reviewed, though Allmusic referred to the release as "holiday market product," "tepid", and "directionless".[11]

Day released an EP, introducing his new album, featuring three new songs: "Be There", "40 Hours", and "Counting On Me". These tracks are available on iTunes. "Be There", produced by Kevin Griffin, Mike Flynn, and Warren Huart, was serviced to radio as the first single from the album.

Day released his third full-length album, Sound the Alarm,[2] under the Epic music label on September 8, 2009.[3] After an extensive tour schedule following the release of Stop, Day decided to take some time off, during which he sorted through his emotions by writing songs, many of which have made their way onto Sound the Alarm. "I toured for five years straight before Stop All The World Now came out, then for three years non-stop after it was released," Day says.[2]

To get his desired range of sounds and moods, Day recorded in a variety of locations, including Los Angeles, New York (Joel Hamilton), London, Minneapolis, and Bloomington, Indiana, between the spring of 2006 and fall of 2008. He also collaborated with several musicians and producers, including Martin Terefe (Jason Mraz, KT Tunstall), Mike Denneen (Aimee Mann, Fountains of Wayne), Mike Flynn (The Fray, Augustana), Warren Huart (The Fray, Augustana, Better Than Ezra) and Kevin Griffin. "Be There" and "Longest Night" have been used in the CW show The Vampire Diaries.

Consisting of tracks that were left off Sound the Alarm, the Ceasefire EP was released on June 29, 2011.

Day created a PledgeMusic campaign in December 2014 to fund a new album, Lanterns, which was released to pledgers on April 16, 2015.[4] The album was released on iTunes April 28, 2015. Day's loyal fan base have given mostly favorable reviews, with many expressing that it is reminiscent in sound and feel of his first album, Australia. Several songs on the album feature Aimee Mann on backing vocals.

Day received significant negative attention after two high-profile arrests. In 2004, Day was arrested and charged over an incident in which he was accused of locking a fan in the toilet of his tour bus and destroying the cellular phone of another, for which he was fined.[12] In December 2005, Day was arrested in Boston after reportedly verbally abusing the flight crew while under the influence of alcohol and sleeping pills. He was sentenced to one year's probation on April 26, 2006.[13]

In a 2013 interview, Day reflected on his younger experiences by saying, "I was a kid from Maine who went from zero to 380 in about two seconds, so it was kind of overwhelming. But that’s no excuse. I drank a bit too much. A lot of kids run wild, but it’s a big difference when people know who you are.”[14]

This article uses material from the article Howie Day from the free encyclopedia Wikipedia and it is licensed under the GNU Free Documentation License.

I Just Called To Say I Love You Stevie Wonder
Update Required To play the media you will need to either update your browser to a recent version or update your Flash plugin.