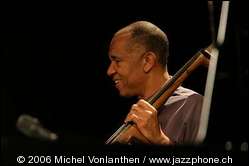 John Lee Clayton Jr. began seriously undertaking the study of double bass at age 16, studying with bass legend Ray Brown. By age 19, he had become a bassist on Henry Mancini's television series The Mancini Generation and later graduated in 1975 from Indiana University's Jacobs School of Music with a degree in bass performance.

He went on to tour with the Monty Alexander Trio and the Count Basie Orchestra before taking the position of principal bass in the Amsterdam Philharmonic Orchestra in Amsterdam, Netherlands. However, after five years he returned to the U.S. for a break from the classical genre to work more towards jazz and jazz composition. He soon founded the Clayton-Hamilton Jazz Orchestra with his saxophonist brother Jeff Clayton and drummer Jeff Hamilton. He and his brother also founded The Clayton Brothers which has featured noted instrumentalists such as Bill Cunliffe and Terell Stafford.

From 1999 to 2001 he served as Artistic Director of the Jazz for the Los Angeles Philharmonic program at the Hollywood Bowl and has also conducted the All-Alaska Jazz Band.

His son, Gerald Clayton, is an accomplished jazz pianist, placing second in the Thelonious Monk International Jazz Piano Competition in 2006.

This article uses material from the article John Clayton (bassist) from the free encyclopedia Wikipedia and it is licensed under the GNU Free Documentation License.

Against The Wind Bob Seger & The Silver Bullet Band
Update Required To play the media you will need to either update your browser to a recent version or update your Flash plugin.