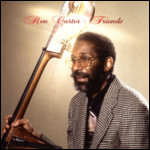 Ronald Levin "Ron" Carter (born May 4, 1937) is an American jazz double bassist. His appearances on 2,221 recording sessions make him the most-recorded jazz bassist in history.[1] Carter is also a cellist who has recorded numerous times on that instrument.[2]

He was a member of the Miles Davis Quintet in the early 1960s, which also included Herbie Hancock, Wayne Shorter and drummer Tony Williams. Carter joined Davis's group in 1963, appearing on the album Seven Steps to Heaven and the follow-up E.S.P.. Carter also performed on some of Hancock, Williams and Shorter's recordings during the sixties for Blue Note Records. He was a sideman on many Blue Note recordings of the era, playing with Sam Rivers, Freddie Hubbard, Duke Pearson, Lee Morgan, McCoy Tyner, Andrew Hill, Horace Silver and many others. He was elected to the Down Beat Jazz Hall of Fame in 2012.[3] In 1993, he won a Grammy Award for Best Jazz Instrumental Group and another Grammy in 1998 for "an instrumental composition for the film" Round Midnight.[4] In 2010 he was honored with France's premier cultural award, the medallion and title of Commander of the Ordre des Arts et des Lettres.[5]

Carter was born in Ferndale, Michigan. He started to play cello at the age of 10, but when his family moved to Detroit, he ran into difficulties performing on cello due to the racial stereotyping of classical musicians, the vast majority of whom were white at that time. Carter switched to playing double bass. He attended Cass Technical High School in Detroit, and, later, the Eastman School of Music in Rochester, New York, where he played in its Philharmonic Orchestra. He finished his bachelor's degree at Eastman in 1959, and in 1961 a master's degree in double bass performance from the Manhattan School of Music in New York City.

His first jobs as a jazz musician were playing bass with Jaki Byard and Chico Hamilton. His first records were made with Eric Dolphy (another former member of Hamilton's group) and Don Ellis, in 1960. His own first date as leader, Where?, with Eric Dolphy, Charlie Persip, Mal Waldron, George Duvivier, and a date also with Dolphy called Out There with George Duvivier and Roy Haynes and Carter on cello; its advanced harmonies and concepts were in step with the third stream movement.

Carter came to fame via the second Miles Davis Quintet in the early 1960s, which also included Herbie Hancock, Wayne Shorter and drummer Tony Williams. Carter joined Davis's group in 1963, appearing on the album Seven Steps to Heaven and the follow-up E.S.P., the latter being the first album to feature only the full quintet. It also featured three of Carter's compositions (the only time he contributed compositions to Davis's group). He stayed with Davis until 1968 (when he was replaced by Dave Holland), and participated in a couple of studio sessions with Davis in 1969 and 1970. Although he played electric bass occasionally during this era of early jazz-rock fusion, he has subsequently stopped playing that instrument, and in the 2000s plays only double bass.

Carter also performed on some of Hancock, Williams and Shorter's recordings during the sixties for Blue Note Records. He was a sideman on many Blue Note recordings of the era, playing with Sam Rivers, Freddie Hubbard, Duke Pearson, Lee Morgan, McCoy Tyner, Andrew Hill, Horace Silver, and others.

After leaving Davis, Carter was for several years a mainstay of CTI Records, making albums under his own name and also appearing on many of the label's records with a diverse range of other musicians. Notable musical partnerships in the 1970s and 1980s included Joe Henderson, Houston Person, Hank Jones, Gabor Szabo and Cedar Walton. During the 1970s he was a member of the New York Jazz Quartet. In 1986, Carter played double bass on "Big Man on Mulberry Street" on Billy Joel's album The Bridge.

In 1993, he won a Grammy Award for Best Jazz Instrumental Group and another Grammy in 1998 for "an instrumental composition for the film" Round Midnight.[4] He appears on the alternative hip hop group A Tribe Called Quest's influential album The Low End Theory on a track called "Verses from the Abstract". He appeared as a member of the jazz combo the Classical Jazz Quartet. In 1994, Carter appeared on the Red Hot Organization's compilation album, Stolen Moments: Red Hot + Cool.

The album, meant to raise awareness and funds in support of the AIDS epidemic in relation to the African-American community, was heralded as "Album of the Year" by TIME. In 2001, Carter collaborated with Black Star and John Patton to record "Money Jungle" for the Red Hot Organization's compilation album, Red Hot + Indigo, a tribute to Duke Ellington.

Carter is a Distinguished Professor Emeritus of the Music Department of City College of New York, having taught there for 20 years,[6] and received an honorary Doctorate from the Berklee College of Music in Spring 2005.[7]

He joined the faculty of the Juilliard School in New York City in 2008, teaching bass in the school's Jazz Studies program. Carter made an appearance in Robert Altman's 1996 film, Kansas City. The end credits feature him and fellow bassist Christian McBride duetting on "Solitude".

Carter sits on the Advisory Committee of the Board of Directors of The Jazz Foundation of America and on the Honorary Founder's Committee.[8] Carter has worked with the Jazz Foundation since its inception to save the homes and the lives of America's elderly jazz and blues musicians including musicians that survived Hurricane Katrina.[9]

Carter appeared as himself in an episode of the HBO series Treme entitled "What Is New Orleans." Carter's authorized biography, Ron Carter: Finding the Right Notes, by Dan Ouellette, was published by ArtistShare in 2008. In 2013, Carter was one of four judges at Jazz at Lincoln Center's 18th Annual Essentially Ellington competition and festival.

This article uses material from the article Ron Carter from the free encyclopedia Wikipedia and it is licensed under the GNU Free Documentation License.

I Don't Want To Talk About It Marit Larsen
Update Required To play the media you will need to either update your browser to a recent version or update your Flash plugin.