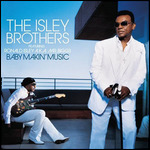 Ronald Isley ( /azli/; born May 21, 1941) is an American recording artist, songwriter, record producer, and occasional actor. Isley is better known as the lead singer and founding member of the family music group the Isley Brothers.

Ronald Isley was born the third of six brothers (O'Kelly Isley, Jr., Rudolph Isley, Ronald, Vernon Isley, Ernie Isley, Marvin Isley) to Sallye Bernice (Bell) and O'Kelly Isley, Sr.[1] Ronald, like many of his siblings, began his career in the church. He began singing at the age of three, winning a $25 war bond for singing at a spiritual contest at the Union Baptist Church. By the age of seven, Ronald was singing on-stage at venues such as the Regal Theater in Chicago, alongside Dinah Washington and a few other notables.

By his early teens, he was singing regularly with his brothers in church tours and also first appeared on TV on Ted Mack's Amateur Hour. In 1957, sixteen-year-old Ronald and his two elder brothers Kelly, 19 and Rudy, 18, moved to New York, recording doo-wop for local labels before landing a major deal with RCA Records in 1959, where the trio wrote and released their anthemic "Shout." By the summer of 1959, the Isley family had moved from Cincinnati to a home in Englewood, New Jersey.[2]

For much of the Isley Brothers' duration, Ron Isley would remain the group's consistent member of the group as well as the lead vocalist for most of the group's tenure with sporadic lead shares with his older brothers. In 1969, Ron and his brothers reformed T-Neck Records in a need to produce themselves without the control of record labels, forming the label shortly after ending a brief tenure with Motown. In 1973, the group's style and sound drastically changed following the release of the 3 + 3 album where brothers Ernie Isley and Marvin Isley and in-law Chris Jasper permanently enter the brothers' lineup, writing the music and lyrics to the group's new sound. The younger brothers had been providing instrumental help for the brothers since the late 1960s. By the mid-1970s, Ronald was living in Teaneck, New Jersey.[2]

After Kelly Isley's death in 1986 and Rudy Isley's exit to fulfill a dream of ministry in 1989, Ronald has carried on with the Isley Brothers name either as a solo artist or with accompanying help from the group's younger brothers, much more prominently, Ernie Isley. In 1990, Isley scored a top-ten duet with Rod Stewart with a cover of his brothers' hit "This Old Heart of Mine (Is Weak for You)," and in 2003 Ronald recorded a solo album, Here I Am: Bacharach Meets Isley, with Burt Bacharach. In addition, Ron Isley became a sought-after hook singer for R&B veteran R. Kelly, and hip-hop acts such as Warren G., 2Pac and UGK.

In 2013, Ronald released his second solo album sign labels eOne. The album includes the first single "Dinner and A Movie".

In 1993, Isley married producer/composer/singer Angela Winbush in Los Angeles, California. They quietly divorced in early 2002.[3] When Winbush received chemotherapy following her ovarian cancer diagnosis, Isley was by her side giving her his support in her recovery. He has older children with various women, including daughters Tawanna and Trenisha. In 2004, while in London, Isley suffered a mild stroke, which halted an Isley Brothers tour there. In September 2005, Isley made headlines when he married background singer Kandy Johnson (of the duo JS/Johnson Sisters), who is 35 years his junior.[4] Their son, Ronald Isley, Jr. was born in January 2007.[5][6] In 2007, it was reported Isley had kidney problems.[7] He still lives in St. Louis.

Isley was charged with and convicted of tax evasion charges. The Hollywood Reporter reports Isley was sentenced to 37 months in prison, instead of the maximum sentence, which would have sent Isley to jail for 26 years.[8] Isley's sentence was affirmed by the United States Court of Appeals for the Ninth Circuit.[9][10] Isley was imprisoned at the Federal Correctional Institution at Terre Haute, Indiana, and was scheduled for release on April 13, 2010. He was moved to a half-way house in St. Louis, Missouri following an early departure that October.[11] After his sentence was completed, Isley was released from a federal half-way house on April 13, 2010.

This article uses material from the article Ronald Isley from the free encyclopedia Wikipedia and it is licensed under the GNU Free Documentation License.

Listen To Your Heart Roxette
Update Required To play the media you will need to either update your browser to a recent version or update your Flash plugin.