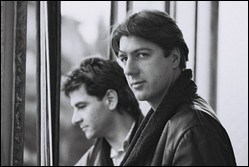 Double (also spelled Doublé; pronounced /duble/)[1] was a Swiss music duo best remembered for their hit single "The Captain of Her Heart".[1][2][3][4]

Double formed in 1983 in Zürich, Switzerland by Felix Haug (drums and keyboards) and Kurt Maloo (guitar and vocals) out of the trio Ping Pong of which both Maloo and Haug were members. Ping Pong formed in 1981, and had some early success with a single entitled "Rhythm Walk", and also recorded some never-released tracks (due to legal issues) with Phil Manzanera of Roxy Music.

Ping Pong had some success with singles and several appearances around Europe in music festivals.

Prior to releasing their debut album, the duo issued several singles, of which "Naningo", "Rangoon Moon", and "Woman of the World" were the most popular. Naningo, unlike their later albums, began as post-punk. The high point of Double's career came shortly after the late 1985 release of their first full length album, Blue. The album contained two of the band's earlier singles as well as the international smash hit, "The Captain of Her Heart"; a plaintive, atmospheric, piano-led ballad which was an immediate success throughout Europe upon its 1986 single release. It reached #8 in the UK Singles Chart,[5] and eventually hit the US Billboard Hot 100 at the end of the year, climbing to #16.

Their next album, Dou3le followed in 1987 but, despite including the acclaimed single "Devils Ball", it failed to emulate the success of its predecessor and Double split shortly after. Kurt Maloo pursued a solo career, in the course of which he has released four albums Single (1990), Soul and Echo (1995), Loopy Avenue (2006) and Summer Of Better Times (2009). Felix Haug died following a heart attack on 1 May 2004.

This article uses material from the article Double (band) from the free encyclopedia Wikipedia and it is licensed under the GNU Free Documentation License.