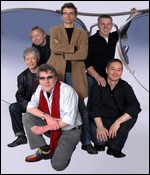 Hofer composed and sang in Bernese German, and was one of the most popular protagonists of Swiss-German rock and pop music, so-called Mundartrock.[2] Co-founding the then popular Swiss rock groups Rumpelstilz and Schmetterband, Hofer published 18 music albums and composed about 350 songs.[3] Polo Hofer also published poems, books, acted in Swiss-oriented movies, and was on tour as singer until his death.[4]

The pop music group Rumpelstilz was founded in 1971 by Hanery Amman (piano) and Polo Hofer (vocals, lyrics), along with Jürg Werren (guitars), Sami Jungen (bass) and Hans Jungen (drums). Hans Jungen was replaced soon after its founding by Küre Güdel, and half a year later René "Schifer" Schafer replaced Jürg Werren. The first single Warehuus Blues (Swiss German, meaning "department store blues") was released in 1973 and was less successful, and in 1975 the first LP Vogelfuetter (meaning "bird seed") was released. The band's performance at the Montreux Jazz Festival in 1975 opened the band's sound to a wider audience. The song Teddy marked the commercial breakthrough in 1976, and shortly afterwards Kiosk became their greatest hit.[5] Both singles are compilations taken from the LP Füüf Narre im Charre (five jesters in the wheelbarrow), which was released in a German translation "Fünf Narren im Karren" one year later, and Kiosk was ranking in the single charts in Germany. The fourth album was published in 1978 as the double LP Fätze u Bitze vo geschter u Jitze, including the film score for Kleine frieren auch im Sommer by Peter von Gunten, and a live concert from the Atlantis event venue in Basel. Thenafter, the band members pursued solo projects. In 1989 three concerts were given, followed by a further live album and an acclaimed tour in Switzerland. After that, the band split definitely.[6]

This article uses material from the article Polo Hofer from the free encyclopedia Wikipedia and it is licensed under the GNU Free Documentation License.

If You Just Knew... Adrian Solo
Update Required To play the media you will need to either update your browser to a recent version or update your Flash plugin.