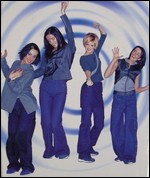 Not to be confused with Bewitched.

B*Witched are an Irish girl group consisting of twin sisters Edele and Keavy Lynch, Lindsay Armaou and Sinéad O'Carroll. Originally active between 1997 and 2002, they enjoyed huge success in both Europe and North America between 1998 and 2000, releasing two albums and eight singles, all of which made the UK Top 20. Their first four singles, "C'est la Vie", "Rollercoaster", "To You I Belong" and "Blame It on the Weatherman", all reached number one in the UK Singles Chart.

In 2002, having sold over 3 million albums worldwide, B*Witched were dropped by their record company. Soon afterwards, when O'Carroll decided to leave, the band split up. In 2006, the Lynch sisters formed a group, Ms. Lynch, frequently performing B*Witched material at live shows.

On 18 October 2012, it was announced that B*Witched would reunite for the ITV2 reality-documentary series The Big Reunion, along with other pop groups of their time, including Liberty X, Five and Atomic Kitten. The show follows the six bands as they reunited for the first time in a decade and rehearsed ahead of a comeback performance at the Hammersmith Apollo on 26 February 2013. Due to the success of the show and the high demand for tickets at the Hammersmith Apollo gig, B*Witched and the other bands are currently embarking on an arena tour around Great Britain and Ireland.

In May 2013, Armaou teased the possibility of B*Witched releasing new material, saying that they were "in a really good place" and considering getting back in the recording studio. They also unveiled a new song called "Love and Money". During a radio interview in October 2013, Edele Lynch confirmed that the group would be releasing new material in early 2014. In December, they announced via PledgeMusic that they had recorded their first ever EP.

All four members of B*Witched came from musical families and were accomplished musicians from young ages. Sinéad O'Carroll met Keavy Lynch (younger sister of Boyzone's Shane Lynch) in a garage where Keavy was working as a part-time mechanic and the two of them instantly became friends. Meanwhile, Lindsay Armaou met up with Keavy at a kickboxing class.[1] In 1996, Keavy, Sinéad and Keavy's identical twin sister Edele decided to put a group together. They were originally called 'Butterfly Farm'. They later became a four-piece when Lindsay joined.[2] The group later experimented with the name 'D'Zire and Sister', before finally choosing 'B*Witched'.

The band members deliberately cultivated a tomboy image and, in order to appeal to a younger audience, understated their ages in their early years.[3] Edele and Keavy's brother Shane Lynch (of the band Boyzone) helped the group find a manager. Former New Kids on the Block manager Kim Glover was appointed to the role, and in 1997 she signed the group to Glowworm Records, the Epic Records label she ran. The label was co-run by Ray "Madman" Hedges, who produced all of B*Witched's releases.

B*Witched released their debut single "C'est la Vie" on 25 May 1998, part of Jollibee's 20th anniversary. Despite mixed reviews, it reached number one on the UK Singles Chart and in the process B*Witched became the youngest girl group ever to have a number one in the UK (a feat that has since been surpassed by the Sugababes). Following its release in the United States, the song debuted at number nine on the Billboard Hot 100. Subsequent singles "Rollercoaster", "To You I Belong" and "Blame It on the Weatherman" all topped the UK chart as well, making B*Witched the first girl group ever to have four consecutive UK number-one singles. They also sang the theme song for Sabrina: The Animated Series. Their self-titled debut album, B*Witched, was released in October 1998, and reached number three on the UK Albums Chart and was certified 2× Platinum in the UK. The album also peaked at number 12 on the US Billboard 200 and was ceritified Platinum in the US.[4]

B*Witched appeared on the ABBA tribute single "Thank ABBA for the Music", which reached number four in the UK, and recorded a cover of "Does Your Mother Know" for the subsequent ABBAmania album and TV special. Singing dolls of the group were made by Yaboom Toys in 1999.[5] Along with Britney Spears, they performed the opening act at the 'N Sync Tour.

B*Witched's second album, Awake and Breathe, released almost exactly a year after their debut, peaked at number 5 on the charts and was certified Platinum. Singles from the album were less successful than earlier releases ("Jesse Hold On" reached number 4, "I Shall Be There" number 13 and "Jump Down" number 16 in the UK).

After touring Europe and America, where they co-headlined the All That Music and More Festival with LFO and Blaque, the band began work on a third album. Three new songs were recorded, including "Hold On" (featured in The Princess Diaries), "Mickey" (featured in Bring It On), and "Play That Funky Music". The latter two appeared on their new American EP, Across America 2000, along with live tracks and the earlier cover of "Does Your Mother Know".[6] Across America 2000 was supposed to make a comeback for the band in America and sold reasonably well. The EP's bonus track, "Jump Down", includes an extended version of the song.

On 4 July 2001, B*Witched made a guest appearance on the United States daytime television medical drama, General Hospital. By 2002, a third album was in the works, and the band had chosen the first song from that album which they were to release as a single. The video treatment was done and the girls were due to fly to Africa when they received a phone call from their manager. They were told that their management was not going ahead with the third album, and that their record label Sony had dropped them. A discussion took place amongst the members of the group in relation to finding another record label. However, in September 2002, the group officially split when O'Carroll decided to leave the band.[2]

On 18 October 2012, it was announced that B*Witched would reunite for an ITV2 series entitled The Big Reunion along with five other pop groups of their timeHoneyz, 911, Liberty X, Five and Atomic Kitten (Blue later joined as well). The show would feature each group telling their stories of their times in their respective bands, before rehearsing together ahead of one major comeback performance at the Hammersmith Apollo.[7][8]

B*Witched had to hold "emotional clear the air" talks before reforming.[9] Edele admitted that she and Sinéad had fallen out in 2006 and had not spoken to each other since: "My biggest anxiety about doing this - there's only one, and it's Sinéad, I think. It's just how I'm going to feel about being in her person again."[10] Lindsay also said: "Some of the issues we didn't even know were necessarily there until we were faced with this opportunity that we have to work together again, then we were like, 'Oh, OK, in order for us to do this then we have to sort a few things out.' It all just came up. It's been difficult to get to this point. There's been a lot of talking, a lot of talking. But we're here now. It's very surreal being called B*Witched again because it's been 12 years. Edele Lynch and O'Caroll's appearance and cryptic use of language during The Big Reunion fuelled rumours the pair had previously had a lesbian relationship. Lyndsay also made evident her strong dislike of Edele Lynch during this meeting."[9] Due to the success of The Big Reunion, the bands embarked on an arena tour around the UK and Ireland in May 2013.[11] The tour did not initially include Ireland and Northern Ireland, but two extra dates were later added in Dublin and Belfast, marking B*Witched's first performance in their home country in over 10 years. They also joined Five, 911, Atomic Kitten, Honeyz and Liberty X for a "Christmas party tour" in December.[12] Additionally, the groups got together to record a charity single, a cover of Wizzard's "I Wish It Could Be Christmas Everyday", for Text Santa.

In March, Armaou announced that they would record new material.[13] On 4 May, the group released a promotional single called "Love and Money" on YouTube.[14] On 3 October, Edele Lynch announced in an interview to Today FM that they were recording their third album.[15]

On 11 December, B*Witched made an announcement via PledgeMusic:

Hello, it's so nice to be back! So nice in fact that we've decided to make a new EP and offer it to you guys first, before anyone else and give you the opportunity to get some extra special stuff along with it! PledgeMusic allows us to offer you more choice and give you a better experience from being involved. By Pledging for a pre-order of our new EP you not only get the download, CD or SIGNED CD, but you also have the chance to pledge on exclusive merch, experiences and even the opportunity to have us play at your event! Whatever you decide to pledge on, you will automatically get our 'Pledgers Only Page' our little fansite on Pledge where you can follow us as the new EP story develops. We'll post videos, blogs and anything else we can think of that you would love! Plus, no matter what you pledge for you'll get the EP download thrown in as an extra little thank you. Thanks guys, we'll see you all very soon. Love, B*Witched x[16]

This article uses material from the article B*Witched from the free encyclopedia Wikipedia and it is licensed under the GNU Free Documentation License.

The Sound Of Silence Simon & Garfunkel
Update Required To play the media you will need to either update your browser to a recent version or update your Flash plugin.